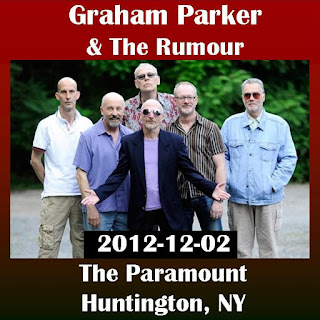 This just in, another wonderful show from the current Graham Parker & The Rumour Reunion Tour. This one, from just about a week after the first show in Tarrytown (featured here), is from Huntington, NY, has a somewhat shorter set, but features a better recording (brighter, clearer) than the last one, and thus makes it easier to hear everything the band is doing (as well as Graham's heartfelt vocals), which makes this one even more of a joy to listen to (although it is missing several great songs from the opening night show). One song that was added for this show, though, was 'Stupefaction', from The Up Escalator. So, here is another great show from these legendary performers on another stop on this legendary tour (for details on band and tour, see previous post). Enjoy!

Many, many thank you's for the GP shows from the new tour. Much appreciated. So great hearing GP back with the band again. The man is an underrated genius in my opinion.