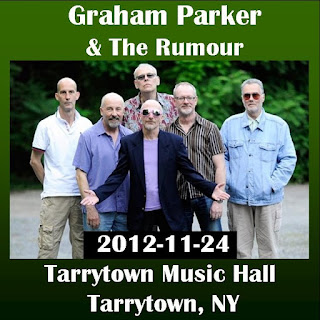 This is turning into a big year for one of our long-time favorites, Graham Parker. Earlier this year, he reunited with his legendary crack back-up band from his glory days, the Rumour (complete with all 5 original members), and now they have released their first new album together in over 30 years (titled Three Chords Good, available now), and even better, have now started out on tour together, again, for the first time in over 30 years. Graham and the Band are also featured prominently in a new Hollywood Movie (Judd Apatow's This Is 40, starring Paul Rudd) that is premiering soon, and is providing much (needed) publicity for Graham and the Rumour (and yes , they actually appear and perform in the movie, not just as part of the soundtrack). And to top that all off, here is an actual recording from the first night of their new tour, launched in Tarrytown, NY, 11-24-2012. So, here is a good quality audience recording from that first night, and it shows Graham and the Band in fine form. They put on a great show, featuring a good mix of new songs (7 from the new album) and old classics (over a dozen from the classic period of GP&The Rumour). Ok, maybe they don't still have the same fire and intensity they once did, but they sound great, and it is wonderful to hear them back together playing live again. And, although I have not heard the entire new album, what I have heard (and the new tracks here), sound really good to me, so I'm sure the new album is worth getting, too (I will be getting it, just haven't gotten to it yet). So, anyway, enjoy this gem in the next stage of Graham's wonderful career, and really, how great is it to hear him with the entire Rumour band (Martin Belmont, Brinsley Schwarz, Bob Andrews, Andrew Bodnar, and Steve Goulding)?  Enjoy.

Taper (larryrulz) notes: Fantastic start to the first Graham Parker and The Rumour tour in over 30 years. The audience was into it but not a distraction at all. The setlist is a good mix of new and old… In this recording, there is a gap of about two minutes’ duration between the end of 'Local Girls' and the beginning of 'You Can’t Be Too Strong'. The gap consists mostly of applause and a very brief portion of Graham’s banter before 'You Can’t Be Too Strong'. No music is missing.

Thanks to the taper (larryrulz) and BigO Worldwide for making this available.

I was conflicted about this, wanting desparately to hear them again but, simultaneously, not wanting to hear their musical legacy (and my memories) diluted.

The former won out, and I'm happy to say G.P. and the Rumour have returned in fighting trim. This is one of 2012's most-welcome releases.

(Not to mention a candidate for my Top Ten to boot.)

Thank you for this wonderful 'Christmas Cracker'! I, too, was a little nervous about how they would sound after all these years, I mean I loved the '81 Celtics but would I want to see Bird, McHale, and Parish lumber up and down a basketball court today?
However, the Rumour can still work the full-court press, and GP still has that winning hook shot in his repertoire.
Thank you!