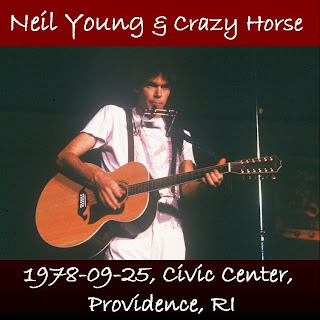 Here's more Neil Young, but this time I'm proud to be able to present another in our series of previously uncirculated audience recordings from David M. This one is from the Providence, RI show of the excellent 1978 Rust Never Sleeps Tour. It's really a pretty good, although not great, sounding recording, comparable to other available audience recordings from this tour and around this time (such as the NY shows, MSG & Uniondale). Although the setlist was the same for virtually all the shows on this tour, it is still great to get to hear different performances from those already available, and there are some fine versions here. Although this was called the Rust Never Sleeps Tour, it came almost a full year before the release of the album of the same name (Rust Never Sleeps, July, 1979), and actually also was even before the release of Comes A Time (October, 1978). So, although this should have been the Comes A Time Tour (album being released around this time), the setlist includes only 3 songs from Comes A Time and 6 from Rust Never Sleeps. Neil is one of the only artists that seems to regularly tour with new material well before it has been released to the public. Of course, there also was an excellent official live album from this tour (Live Rust, October 1979), and which was taken primarily from the Cow Palace-SF and Inglewood, CA shows, but that album did not include the full show. Thus, this recording (and other unofficial live recordings) contain several songs ('Already One', 'Thrasher', 'Welfare Mothers', and 'Come On Baby Let's Go Downtown') that are not included on Live Rust. But this recording is missing the usual encore number, which was 'Tonight's the Night' (not sure whether it was not played that night, or just not recorded). Anyway, once again, we are greatly indebted to David M for making this recording available, and once again, I have done some minor editing to improve sound quality (but pretty minimal this time). So, here it is, a 'new' recording of a great show from the Rust Never Sleeps Tour. Enjoy.

Taken directly from a previously uncirculated audience master recording by David M. Some editing, adjustments made for better sound quality and presentation. This version prepared exclusively for The BB Chronicles by BBKron