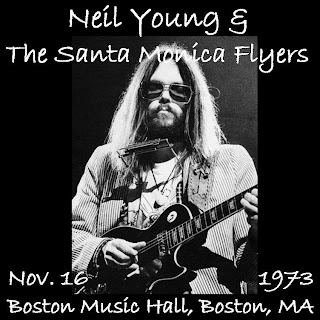 Here's more Neil Young, and yet another previously uncirculated audience recording from David M, this one from the legendary 1973 Tonight's the Night Tour. Unfortunately, it's not a very good recording, as it was marred by an annoying, persistent humming background noise (David said that because of tight security there, the Mic was too close to the recorder and picked up motor noise from the recorder). Now, this isn't much of a problem on the louder, electric songs (because signal/noise ratio was still OK), which really sound pretty good, but this was a definite problem for the acoustic numbers, which were recorded at a very low volume (just about the same volume as the background noise), making it very difficult to hear much at all, even after amplification (which also concurrently amplified the background noise). I have tried to do what I could to reduce the background noise in these songs ('New Mama', 'Needle&Damage', 'Ohio', 'Human Highway', and 'Helpless'), and it worked (to some degree), but it also meant I had to severely dampen much of the midrange frequencies, so fidelity is not very good on those songs. I also had to jettison several sections of beween song talk because it just could not be heard or understood at all. However, all the songs are here, and between the pretty good sound on the electric tracks and the poor acoustic tracks, I gave this an overall fair quality rating, but it is still highly listenable overall. And the show itself is great, and well worth downloading and checking out, particularly as there are relatively few shows available from this tour. And this show also features an impromptu Happy Birthday to Neil from the band (and audience), even though it was not his actual birthday (which was a few nights earlier, 11/12). This show also features one of the only performances of 'Ohio' from this tour, as well an extra extended 'Tonight's the Night'  Once again, on this tour Neil came out with a bunch of new songs that the audience had never heard before (as he had in his previous Time Fades Away tour, for which the live album had also not yet been released). The Tonight's The Night album, which was recorded just before this tour started (but would not be released for another 2 years, because the record  company thought it was too dark and depressing) and this tour were notorious for providing his many new fans (from CSNY and Harvest fame) with exactly what they didn't want, generally confusing, bewildering, and sometimes angering them with songs they didn't know or much like. This was a difficult period for Neil (as was discussed in my previous post for the 'Last Album' Time Fades Away Tour here), and although the music was not received well then, it is now looked upon in retrospect as one of his greatest periods of productivity and achievement. If you haven't checked out Neil's shows from this period (and even if you have), you should check this out, as it is decidedly different from shows from any other period, and great stuff it is. Thanks again to David for making these great, authentic, historic recordings available here.

Many thanks for sharing!