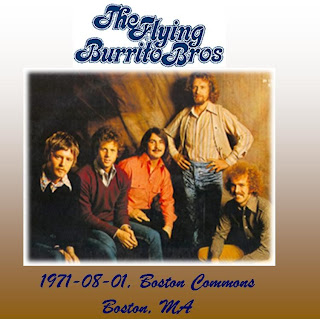 OK, previously I have featured various shows with Chris Hillman (SHF, solo, band), Rick Roberts (Firefall), and Bernie Leadon (Eagles), as well as later shows where they reunited in various combinations (Chris Hillman 1975, 1984). Well, here is a great show from their earlier days when they all performed together in the legendary country-rock band, The Flying Burrito Brothers. Once again, this is a rare, previously uncirculated audience master recording from David M, featuring the last great lineup of The Flying Burrito Brothers, shortly before Bernie Leadon left the group (to join Don Henley and Glenn Frey in Linda Ronstadt's band and then form the Eagles), followed shortly thereafter by the departure of Chris Hillman and Al Perkins (to join Stephen Stills in Manassas). As most know, FBB suffered through many lineup changes in a relatively short period, and with no disrespect to the very talented Gram Parsons, who originally formed FBB with Chris Hillman in 1968, but I actually think that the band on this recording was the best overall FBB lineup. Bernie Leadon's banjo and multi-instrumentalism, as well as the addition of Rick Roberts songwriting and vocal style added diversity and new dimensions and musical directions for the band. But, it was to be very short-lived. This tour was in support of their third album (but first with this lineup), simply titled The Flying Burrito Brothers. So, here's where things really started for these guys (well, except Hillman who already was a veteran of the Byrds), before their more famous bands and careers, in one of the true pioneers of the 'country-rock' sound and style, the Flying Burrito Brothers.

Taken directly from a previously uncirculated audience master recording by David M. Some editing, adjustments made for better sound quality and presentation. This version prepared exclusively for The BB Chronicles (http://bbchron.blogspot.com) by BBKron.
Posted by BBKron at 2:01 PM

Many thanks. I am a very big fanof the burritos from the beginning to the late seventies, and i think that the Roberts era is fantastic too.

Thanks a ton! These live shows beat the heck out of studio recordings. Your blog has some great stuff and thanks for letting us share it.

Thanks for everything, BB
W