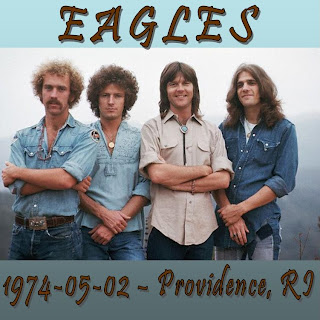 Here is another rare, previously uncirculated audience recording from David M of an early Eagles performance featuring the original quartet. This one is from about 6 months after the Holy Cross show (previously posted), from May 1974, early in the On The Border Tour, shortly after the release of their third album. This recording is of substantially better quality than the previous one, and although this performance doesn't have anything as earth-shattering as the two previously unreleased songs featured on the last recording, it is nonetheless a great show from this period, and does feature some new elements. Overall, the show setlist is surprisingly similar to the previous Holy Cross show, despite this being a brand new tour in support of their new album, with the bulk of the material still coming from their first two albums, and only four songs from the new On The Border album ('Already Gone', 'Ol' 55', 'James Dean', and 'Good Day in Hell'). And, actually, 'Already Gone', which was the first single released from the new album, was the only new song addition from the previous Holy Cross show. This basic setlist and structure was used throughout this tour, and even on through subsequent tours. Still present was the inclusion of the 'Doolin-Dalton/ DD-Desperado Reprise' early in the show (although some other songs from Desperado present in the last tour ['Certain Kind of Fool', 'Out of Control', 'Bitter Creek'] were dropped by this time), as well as Bernie's Bluegrass/Banjo sequence ('Twenty-One', 'Blackberry Blossom', 'Earlybird', 'Shenandoah Valley Breakdown') in the middle of the set. In addition to the new On The Border songs, some other new aspects included in this show were a cool new extended Blues Intro to 'Witchy Woman', and this may have been the first show (or at least first recorded show) where the full version of  'Desperado' was used as an encore. Although it may seem odd now because 'Desperado' has become such a classic, but it was not really included in these early shows very often (usually only the abbreviated 'Desperado Reprise' was played). Later, it would become a regular part of their shows, but at this stage it was not played very often. It would not take it's place as their standard concert closer until the 'Hell Freezes Over Reunion Tour' in 1994, where it has remained right up to their most recent shows. But back in 1974, it was a rarity. This also was one of the last of the shows where they were still a quartet. Don Felder, who was brought in to add some slide guitar on a couple tracks on On The Border, really hit it off with the band and was made a member of the band soon after (Credited on the album as a "Late Arrival"). However, he was not part of the live band shows for at least the early part of the On The Border Tour (It is known he did not perform at their California Jam appearance in April, and according to David's notes was not present at this May concert either, but he was present when the band made their appearance on Don Kirshner's Rock Concert sometime in 1974, so exactly when he began touring with the band is uncertain). Anyway, this is another great Eagles show (of which there are very few available from this period), and this is a good quality recording. There were, however, some tape problems resulting in some speed/pitch fluctuations in some songs (particularly near the middle of the show), but they are mostly minor.  So, here once again, is a great 'new' recording from David M of a great old show by a great old group. Much thanks again to David M for making this available for all to enjoy after all these years.

Taken directly from a previously uncirculated audience master recording by David M. Some editing, adjustments made for better sound quality and presentation. This version prepared exclusively for The BB Chronicles by BBKron.

Up Next:  We go back a few more years to visit one of the Eagles forefathers, The Flying Burrito Brothers, and one of the last shows that Bernie did with them before leaving for the Eagles.
Posted by BBKron at 11:36 AM

Tried to download the show a number of times (both mp3 & flac)but the download never completes - is there a problem with the upload.

Hi, I've been meaning to post and thank you so much for the two Eagles shows. I am a big fan of Bearnie and they were a big treat. I am very psyched for the next up Flying Burrito Brothers!

Hello
I've tried for days to download this show and it times out everytime. Thanks for looking into it...