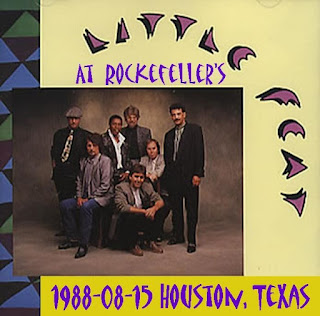 
Ok, here's one more Little Feat show before we move on, this one from the post-George reunited band in 1988 (just to show that they were still great in the post-George era). Craig Fuller (formerly of Pure Prairie League) had opened (as the Kaz/Fuller Band) for and played with the Feat on their last tour (1978), so the band was already comfortable with him when they asked him to join the band, primarily for lead vocals. Multi-instrumentalist Fred Tackett (who also had previously played with the band on most of their studio albums) was also officially added for additional guitar and miscellaneous instrument work. The rest of the band was the same core as when George was there (Payne, Barrere, Gradney, Hayward, and Clayton), which is more than enough to make a great rockin' band. The re-formed and re-energized band came out smokin' with one of the group's all-time best albums, Let It Roll, in 1988, and their subsequent tour was as great as ever (As great as George was, Payne's keyboard work has always been my favorite part of the band). The new songs blended in great with the old classics, and the band has been rockin' on ever since. Fuller only stayed until 1993, however, and after that female vocalist Shaun Murphy was added to the group, which resulted in a somewhat different vocal sound for some of the classics, but it still worked well, and the Feat continue to put on a great concert show to this day. As mentioned previously hundreds of Little Feat shows (from all eras) are available through the Live Music Archives (www.archive.org/details/etree). However, this excellent 1988 soundboard show is not available there, but you can get it right here.

File has expired and does not exist anymore...