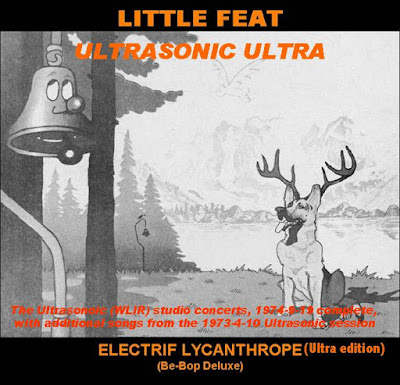 Here are a couple classic performances by the legendary Little Feat, one of the greatest (and perhaps most underappreciated) Rock n' Roll Bands of all time.Their unique blend of driving Rock 'n Roll with Folk, Blues, New Orleans Funk, and Jazz-Rock Fusion elements, with Lowell George's inimitable songs, vocals, and slide guitar work, Bill Payne's driving keyboard funk, Paul Barrere's guitar, and one of the best rhythm sections ever (Kenny Gradney-bass, Richie Hayward-drums, and Sam Clayton-percussion), remains unsurpassed. This is my own compilation of the Ultrasonic Radio Sessions. These are tracks from two separate performances at the Ultrasonic (WLIR) Studios in Hempstead, NY combined into one full CD-length show. I have taken the superb Pre-FM Master recordings from The 1974-09-19 Session, added the additional 3 songs from the FM rebroadcast that were played that day but not included on the original radio broadcast, and then added just the tracks from the 1973-04-10 Ultrasonic show that were different from those played at the 1974 show (taken from an FM broadcast). Thus, this compilation includes (for the first time) the best available version of all of the songs played over the course of the two sessions, arranged into a seamless concert program. Although I have not edited the original Pre-FM recordings (because they are nearly perfect), I have edited out some of the between song talk and intros from the 1973 tracks, so that the whole show will fit on one CD (FLAC version only), and this one is definitely worth burning onto CD. There are few high quality recordings from these early days and prime period of this great band (and these are probably the best). So, enjoy this great compilation of these amazing Feats, which I have dubbed 'Ultrasonic Ultra'.
BTW, there are numerous (over 200, including many SBD and FM) Little Feat shows available in both lossless and mp3 at the Internet Archives - Live Music archives (www.archive.org/details/etree), which is where I got these shows. Check 'em out.

little late to the party :) but always up for good music! THankyou for a great job,keep the music flowing!

I would so much love, love, love to hear this. Would an upload be possible? Thanks so much :)

Thanks for all the work you put into this wonderful collection. I downloaded it yesterday and am noticing that tracks 10-17 have "track volume" adjustments made (-3.6 dB for Sailin' Shoes to -6.3 dB for A Apolitical Blues) while the first 9 tracks do not. Is it possible to obtain the last 8 tracks without track volume adjustments? Thanks again.

gunner95,
The later tracks come from different recordings and sessions (as already indicated), and thus I adjusted volume levels of these to be consistent with the levels in the excellent PFM (tracks 1-9) recording. This was my enhanced compilation version. If you want the original unedited recordings, you can get them through the Internet Archives-Live Music Archive, as indicated in the post.

Ahhh...now it all makes sense. And you are right, you mentioned it at the top, I just missed it. Thanks again; it is a great piece of music and I'll leave it as you've provided.

YOU RULE!!!!!! Thanks so much for this Re-UP!! Just in time for my weekly Friday BBQ :) You made my weekend!

Man, this sounds amazing...the quality of this audio is top notch!