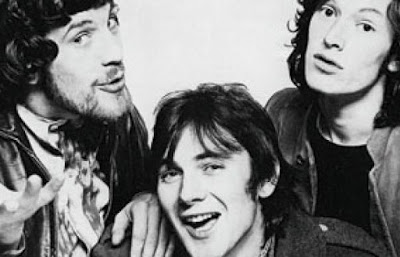 Here's more from Traffic. As mentioned in the last post, Traffic briefly disbanded in early 1969 when Steve Winwood abruptly left the band to join Eric Clapton in his new supergroup Blind Faith. But because Blind Faith turned out being so short-lived, Winwood was back recording with Chris Wood and Jim Capaldi before the end of the year. Those sessions, which were at first intended to be Winwood's first solo album ended up being turned into the next full-fledged Traffic album, and one of their best, John Barleycorn Must Die (1970). Although the album was made with just the core trio, for the subsequent 1970 tour Blind Faith bandmate Ric Grech joined the band on bass, and then stayed on. Following that tour the band expanded further, adding drummer Jim Gordon and percussionist Rebop Kwaku Baah, as well as the final brief return of Dave Mason for one more Live album, Welcome to the Canteen (1971). The larger band (minus Mason) would stay on for their next album foray, Low Spark of High-Heeled Boys (1971). Presented here is an excellent show and recording from the latter part of the 1970 tour. Some of the earlier shows included some different songs, so I've added some additional songs from an audience recording of a July Fillmore West show (as bonus tracks) that includes a rare Traffic performance of Blind Faith's 'Can't Find My Way Back Home'. All around excellent show and performance giving a great demonstration of the artistry of Traffic at this time.

One of the best boots ever in my oh-so-humble opinion!