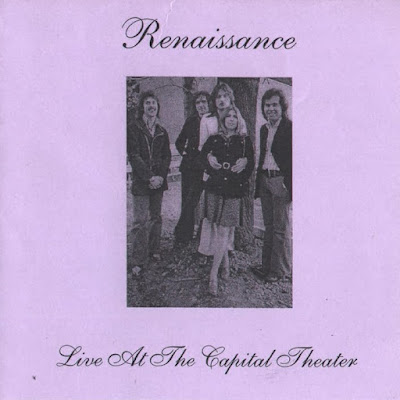 Here's more from Annie Haslam and  Renaissance, this time from a few years later than the previous post, but still during their classic years. This very good radio broadcast show features the band on their tour promoting their recently released album A Song For All Seasons (1978), and following two of their most successful albums, Scheherazade and Other Stories (1975) and Novella (1977). Thus, they were pretty much at their peak here, and feature extended versions of songs from throughout their catalog in this 2-hour show. Unfortunately, however, this would essentially be the end of their 'classic' period, as in their subsequent album, Azure d'Or (1979) they would move away from lush orchestrations and long songs to more short songs and use of syntheisizers, This resulted in losing fans, lower sales, and being dropped by their record company. John Tout and Terryu Sullivan then left the band. Although the band continued into the '80's with additional albums (Camera Camera-1981 and Timeline-1983), their attempts to adjust to the times by moving toward a more synthpop and new wave style was not successful, leading to dissolving the band by the mid-eighties. Various attempts in the '90's to revive the band (with different bands led by Haslam and Dunford separately) were not very successful, But by 2000, a partial reunion with Haslam, Dunford, and Sullivan produced a new album, Tuscany, in 2001. Various other incarnations of a Renaissance-like band, mostly lead by Haslam) have gotten together throughout the subsequent years. Michael Dunford died of a cerebral hemorrhage in 20212 and John Tout died of lung failure in 2015, but Annie still continues on with a new line-up still performing the songs of Renaissance. But here, you can enjoy the unique and refreshing song stylings of this wonderful band still during their peak years.

Hello,
Many thanks for sharing these two Renaissance shows

These are really good ones indeed. Great to have them again in the internet shop.
Thanks,

They were awesome in their prime. Even get a Jon Camp bass solo.