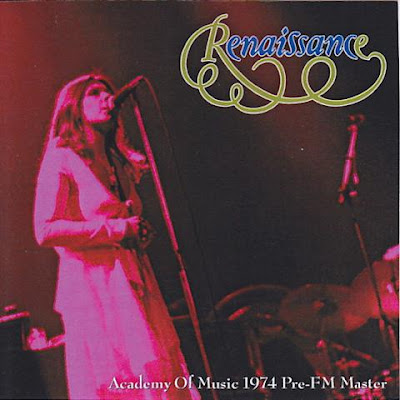 1974-05-17
Academy of Music, New York City, NY
FM broadcast recording (WNEW), very good quality
Available in both Lossless (FLAC) and mp3 (320 kbps) versions
Hearing Annie Haslam in the previously posted Intergalactic Touring Band (1977) project reminded me of how wonderful her vocals are (when she's singing worthy material) and that I haven't listened to her with Renaissance for quite some time (and also that I somehow haven't posted any Renaissance here previously). So, here is some classic Renaissance, from 1974.
Renaissance was an English progressive rock band that combined heavy influences from classical, folk, and jazz into their version of progressive rock, and focused on strong female vocals (from Annie Haslam) and a prominent role for piano and classically styled pieces. Renaissance was first formed in early 1969 by former Yardbirds musicians Keith Relf (guitar/vocals) and Jim McCarty (drums/vocals), who wanted the new band for experimentation with rock, folk, and classical forms. The original lineup also included bassist Louis Cennamo, pianist John Hawken, and Relf's sister Jane as an additional vocalist. They released their first album, self-titled Renaissance, later in 1969, and began work on a second album. But by mid-1970, Relf and McCarty left, and other personnel changes led to various temporary and short-lived lineups being brought in to keep the band going. Guitarist Michael Dunford and keyboardist John Tout joined in late 1970, and vocalist Annie Haslam came on board in early 1971. The album Prologue (1972) was the first to really get the attention of the growing progressive rock fan base, with its unique style and sound. But several more lineup changes continued before what is considered the 'classic' lineup was finalized in 1973, consisting of Haslam, Dunford, Tout, and Jon Camp (bass) and Terry Sullivan (drums), and the beginning of their most successful and celebrated albums [Ashes Are Burning (1973), Turn of the Cards (1974), Scheherzade and Other Stories (1975), Novella (1977), Azure d'Or (1979). Interestingly, this 'classic' lineup did not contain any of the original members of the band.
Featured here is a great show from 1974, which was right around the time of the release of Turn of The Cards. This the show features many songs from that new album as well as the previous album Ashes Are Burning, and features a guest appearance from Wishbone Ash guitarist Andy Powell on the epic title track from that album (he also played on the album track itself), and also includes accompaniment.  by a 24-piece Orchestra (and this was the first time the band had played live with an orchestra). So, check out Renaissance from back in 1974.

I wanna say blog was beautiful, and are interested in news than Trending news celebrity App With interesting celebrity news is for you.