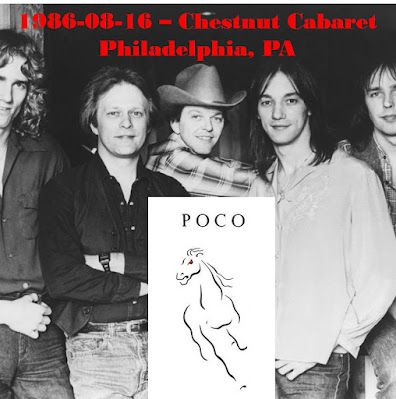 Here's some more from Poco, this one a bit later in their career, in the mid-eighties. So this was after Tim Schmit left and Rusty Young and Paul Cotton had re-formed a new version of Poco in 1978 (originally intended to be the Cotton-Young band, but was persuaded to keep the Poco name), with Britons Charlie Harrison (bass-vocals) and drummer Steve Chapman. This version of the band developed a bit more mainstream pop/rock, less country sound, and their first album with the re-tooled band, Legend (1978) finally struck gold, with two hit singles, 'Crazy Love' and 'Heart of the Night' (Poco's first singles to crack the top 40), and #14 on the album charts. However, they were not able to maintain this momentum, as their subsequent string of  '80's albums, Under the Gun (1980), Blue and Gray (1981), Cowboys and Englishmen (1982), and Ghost Town (1982), suffered diminishing returns. By the time of Inamorata (1984), the band tried to update to a more '80's sound, but it didn't work for them. After poor sales for Inamorata, they lost their record contract and were struggling to keep the band together. After some more lineup changes at bass and drums, Jack Sundrud (bass-vocals joined the band and Steve Chapman came back in 1986 after a brief departure. And that is where the band was at the time of this show. An uncertain future, but a great catalog of songs to play at shows. This is a show from Philadelphia, a good quality soundboard with the band playing a mixture of older and more recent songs. Not long after these series of shows Paul Cotton left the band, but fans of the band know that by 1989, a reunion of the original 5 members (Rusty Young, Richie Furay, Jim Messina, Randy Meisner, and George Grantham was arranged, and their subsequent album, Legacy (1989) did well, producing a couple hit singles, 'Call It Love' and 'Nothing to Hide'. Unfortunately, I have not been able to find a single recording from that 1990 reunion tour. But the reunion was short-lived, with the bigger name players going back to their respective careers, leaving Rusty Young and Poco uncertain again. But Rusty teamed back up with Paul Cotton in 1992 and kept the band going, with various backing players, even sometimes just performing as a duo. Eventually, Sundrud and Grantham returned to the lineup and the band began recording and more regularly touring again. And later, even when he was the only one still going, Rusty Young continued the Poco tradition, right up until his recent death. Here's that glimpse of Poco during the '80's.

Note: Before anyone points out that the picture used is not quite correct for this lineup, let me just say that I could not find any pictures of this band lineup, and this was the closest I could find for this era (after TB Schmit left but before they all got old).

Thanks for the switch to Soildfiles. Can't access Zippy from here.

Decent band, but they should have dropped the Poco name.