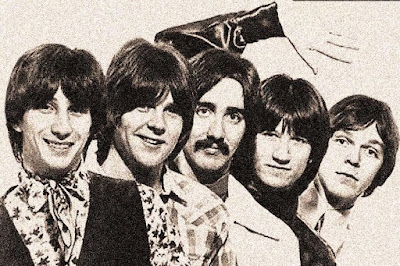 Multi-instrumentalist, vocalist, songwriter, and founding member of the pioneering country-rock band Poco, Rusty Young died last week of a heart attack in his home in Missouri. He was 75. Young was known for his virtuoso pedal steel guitar-playing, in addition to banjo, dobro, and guitar. Poco has been performing as a band for over 50 years, and although there have been many lineup changes over the years, Rusty was the heart and soul of the band, and the only member to be a part of the band from the beginning right up to the present day, and on every album and every gig the band ever played. Rusty started playing the steel guitar at age 6 and became a master, teaching many others. In 1968, when Buffalo Springfield and Richie Furay needed to add pedal steel to a song for their last album, they hired Rusty Young, already known for his abilities, and when Buffalo Springfield broke up shortly after that, Richie Furay and Jim Messina took Rusty with them to form Poco and Young has been with Poco ever since, through all the ups and downs and years albums and shows. In the early years of the band, Rusty was primarily just an instrumentalist, but after Richie Furay left in 1973, Young stepped to the front, as a vocalist and songwriter as well as ace guitarist. Young was credited with bringing the pedal steel to rock music, and showing how it could be an integral part of a rock band. I have already written and posted much about Poco as a long under-appreciated country-rock legendary band, and Young was always at its heart. Although the last studio album by Poco was in 2013, Young and the band were still active and touring, right until the start of the pandemic last year, and plans were in place for shows to start up again later this year, when this sad news came through last week. Rusty Young released his only solo album, Waitin' For The Sun in 2017. Heartfelt condolences to Rusty's fans, friends, and family. But the best way to honor a musicians is through their music. Here today, we go back to those early days of Poco with two short radio shows from 1972 and 1973. The 1972 show is from the Netherlands and when Richie Furay was still in the band. This show includes the same songs as the previously posted Amsterdam show from a few days later, but this is in very good quality, and is available in lossless. The second show comes from Fairleigh Dickinsion University in New Jersey in 1973 and is one of the first series of shows after Furay left the band, and features songs from Crazy Eyes (1973). Adding these shows because there are very few quality recordings from these early days of the band.  I'll add on some other Poco shows from later in their career as well soon. Be sure to check out my previous posts featuring Poco (if you haven't already) here.

Thanks for the comments about Rusty Young. I hadn't read about his passing anywhere else so this is sad news. I've been a Poco fan right from the beginning when I saw them live in 1970.

I'd really like to download this show. However, Zippyshare is just so full of spam and other nastiness that it is essentially non-functional. It's like it sees me coming and just throws a mess of garbage at me. Any chance you could mirror the mp3 post somewhere else? Thanks!

Alan,
I have updated the links to solidfile instead of zippyshare. Zippyshare has become quite unfriendly to use, but it still works (just have to get by all the ads). I am trying to post all new material on solidfile, but it is not always available, and I was just not able to upload to it over the weekend, so had to use zippy instead. but solidfile is back now and I have updated the links. Sorry for the inconvenience. i will add some more Poco shows later this week.

Hello,
Thanks for all that you share. Very sad to learn that Rusty Young went away(I didn't see anything telling about his passing). May he rest in peace.I have been a great fan of Poco since the beginning.
Best regards,
drogos

thank you for both Poco posts...
Rusty was a good man...he had a humbleness about him that was appealing, and he was a kind person...
I met him in the early nineties, and saw him at shows many times in the 2000's...
Rusty kept the fire burning with Poco...through all of the various incarnations of the band, he was the constant...
Rusty leaves behind a rich musical legacy to remember him by...
RIP, and goodbye old friend...