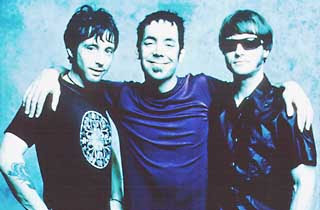 While we are covering under-rated/under-appreciated bands of the '90', coming at you now is Fastball, a great and versatile guitar-rock band from Austin, TX that plays a variety of rock styles, from high-energy, hard-driving rock 'n roll to power pop and quirky, catchy pop songs. Formed by Tony Scalzo (vocals, guitar, bass, keyboards, songwriting), Miles Zuniga (vocals, guitar, songwriting), and Joey Shuffield (drums) in 1995, the band quickly built a strong following in and around the Austin area, and soon signed a record deal with Hollywood records. However, their first album, Make Your Mama Proud (1996) quickly died without much notice, putting the future of the band in doubt. But their second album, All the Pain Money Can Buy (1998) hit the big time, with their lead single 'The Way' becoming a major hit, and follow-up singles 'Fire Escape' and 'Out of My Head' also generating substantial buzz and radioplay, propelling the album to platinum status. Alas, their subsequent album The Harsh Light of Day (2000), despite being a very solid follow-up, failed to generate much enthusiasm (or hits), leaving the band without a record label. Part of the problem seemed to be that the music the band plays is hard to classify, as it doesn't fit into any one category, and those looking for something similar to the 'The Way' (which was a sort of mix of Tex-Mex meets Hotel California strangeness) might have been disappointed that nothing else they did sounded quite like that. But the band persevered, and continued to do their own diverse kinds and styles of music. Although sometimes branded as a 'one-hit wonder', Fastball has continued to make high-quality albums and music through the years, and are still together making music today. Their subsequent albums include Keep Your Wig On (2004), Little White Lies (2009), and Step Into Light (2017). The band is reportedly working on a new album that may be released later in 2019. But here they are back in 1998, enjoying the success of their breakout single and album. This is a very good webcast recording of the band at The House of Blues in New Orleans performing songs from their first 2 albums (as well as a few covers). Check 'em out.