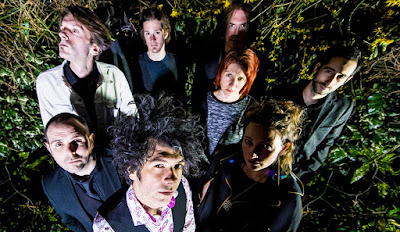 OK, to wrap up this extended look at Progressive Rock, we bring things right up to present day. In the 2000's and beyond, in addition to many of the old classic progressive rock bands continuing, re-forming, reuniting, or re-establishing themselves as live acts, several new bands continued to highlight and expand the traditions of progressive rock for new generations. New bands such as The Mars Volta, The Pineapple Thief, Gazpacho, and others, as well as bands featuring former musicians from other prog bands, such as Frost, Transatlantic, and Stick Men, continued taking progressive rock in new and different directions, while still featuring many of the familiar attributes associated with progressive rock. One of these newer bands, Knifeworld, made quite a splash at last year's Cruise to the Edge (which as I previously mentioned is a yearly Cruise event that features progressive rock acts, both old and new). Knifeworld was formed in 2009 by Multi-instrumentalist Kavus Torabi, a musician born in Iran, but raised in England. Torabi first envisioned Knifeworld as a solo project, with himself playing most of the instruments, but it developed into a full-fledged band, playing what has been called psychedelic, progressive, math rock (complex, atypical rythyms, melodies, etc.). They have released 3 albums and a few EPs, with their latest being Bottled Out of Eden (2016). Now, I have to admit that I had never heard of this band either, but thanks to the taper Lostbrook, who has been providing recordings from recent years of the Cruise to the Edge shows, we have this wonderful live recording from 2018. And even on a Cruise that year that featured great shows from prog veterans such as Yes, Steve Hackett, Carl Palmer, Marillion, Gong, and Focus, from what Lostbrook reported, Knifeworld was one of the most talked about and heralded bands that year.

So, this concludes this extended feature look at Progressive Rock. And although I posted only progressive rock-related shows for a full year on this blog, it seems I only scratched the surface of what progressive rock is all about. I didn't even get to dozens of bands I wanted to feature, including Van Der Graaf Generator, Eloy, Can, Triumvirat, Rare Bird, Happy The Man, etc., and I didn't get to the Jazz-influenced branch of Progressive rock (like Mahavishnu Orchestra, Brand X, Return to Forever, Traffic), or even the actual classsically-influenced bands (such as Renaissance, Gryphon), and many other aspects. But it is time to move on to other things. I know many that previously followed this blog were not thrilled with the recent emphasis on progressive rock, but hopefully, many of you learned some things and found some new music in here that you liked but had not known about before. For me, it was very worthwhile, and I actually learned quite a bit myself and found out about a bunch of bands I didn't know much about previously and found much new music to check out. So, I will move on to other things now, but will still occasionally feature progressive rock posts from time to time. So for fans, there is always more  coming, and for non-fans, I'll get back to posting a variety of other types of great music. Thanks.