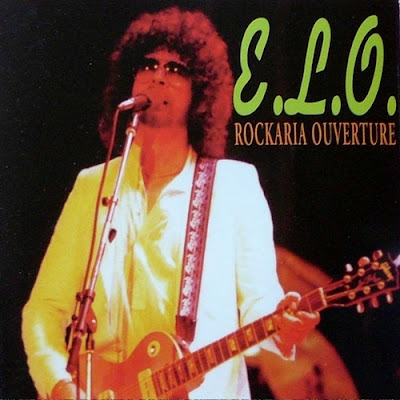 OK, at last, here I am, back on the scene. And here I continue my featured look at Progressive Rock in the '70's and beyond. I had a few more European bands I wanted to feature before we moved back to Britain, but after that long break between posts, I wanted to come back with something strong (and more popular than more relatively obscure bands). So, here is the Electric Light Orchestra. Now, many may not consider ELO to be Prog at all, what with their string of decidedly pop-style hits of the Seventies and early eighties, but at the beginning, they were definitely a Progressive Rock band. ELO was formed in 1970 by songwriters/multi-instrumentalists Roy Wood and Jeff Lynne, and drummer Bev Bevan directly from their previous band, The Move, with Bill Hunt (keyboards) and Richard Tandy (bass) and a quartet of string players rounding out the group. In fact, due to contractual obligations, The Move (with Wood, Lynne, and Bevan all still involved) continued even after formation of ELO, and actually, The Move's last album, Message from the Country and ELO's first album, The Electric Light Orchestra were essentially recorded at the same time, and both were released in 1971. ELO was formed from Wood's concept of combining strings and a classical sound and style with hard-driving guitars and rock n roll. Jeff Lynne joined The Move in 1970 precisely because he was interested in pursuing that new musical direction and the creation of ELO. And those early ELO records are definitely 'progressive rock', with long meandering songs with extended instrumental sections and clashes between the classical and rock influences. However, Roy Wood did not stay long, and left during the recording sessions for the 2nd album, ELO 2, in 1972, taking keyboardist Hunt and a cello player with him, to form his next band, Wizzard. In ELO, Richard Tandy moved over to keyboards and Mike de Albuquerque (bass) and some new string players were added for their next album, and On the Third Day was released in late 1973. With Jeff Lynne now in full control of the band, the songs and style moved more towards Beatlesque pop-rock, but the strings and classical influences were also still evident. Although they had received some previous chart success, their next album, the elaborate concept album, Eldorado (subtitled: A Symphony by The Electric Light Orchestra) in 1974 would be their breakthrough. On this album, the small string section of the band was not enough and Lynne brought in a full orchestra for the full and lush arrangements needed for the album. The single 'Can't Get it Out of My Head' became their first top ten hit in the US, and the album also cracked the top 20. More success followed with Face the Music (1975), producing more hits and (one of my favorites) the sensational instrumental 'Fire on High'. Even greater success followed in subsequent albums, but less and less of the classical bravado was evident and more just great pop melodies continued, making them into the pop sensation they became, but not much left of their more progressive origins. Here is a show from their earlier days, one of the only high quality recordings from those early days. Unfortunately, no decent recordings exist from the Roy Wood days with the band. This is the next best thing, a pair of BBC radio shows in 1973 and early 1974, featuring songs primarily from their third album, On The Third Day, and definitely belonging in the category of Progressive Rock. Unfortunately, the version of 'Roll Over Beethoven' played here does not include the classical Beethoven's 5th Intro, but we'll get another shot at that next time (in the next post).

Welcome back and thank you for this little jem.