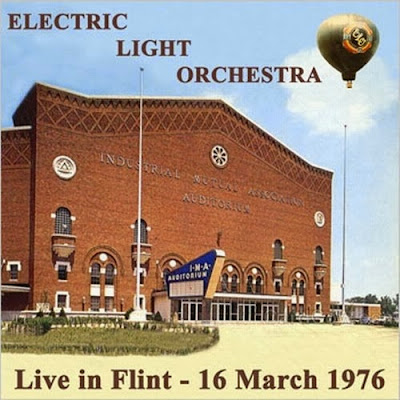 Here's more from ELO, from a bit later in their career, early in 1976 on their Face the Music tour, and at what I would consider to be their best period. Coming off the success of El Dorado (and their first top ten hit, 'Can't Get it Out of My Head'), they released Face the Music in late 1975, which quickly resulted in two more hits ('Evil Woman' and 'Strange Magic') by the time of their tour. But more than that, Face the Music was a just a dynamite album, with a great mix between the classical, pop, and rock influences of the band. This was their first major tour as a headliner, and they made the most of it, with a great set of songs from all their albums up to that point. Opening with a powerhouse trio of songs from Face the Music ('Fire on High', 'Poker', and 'Nightrider'), they went through sections featuring songs from each of their previous albums. Thus, this was the last tour to feature many of their earlier songs, which would be replaced as more hits piled up, which is why this was my favorite period, as they still featured the old ELO, but also had the added aspect of their middle period songs and hits, bu just before they would become more and more pop singles and hit-oriented. Another highlight is that, unlike in the previous (1973) show, they play the full version of 'Roll Over Beethoven', with Beethoven's 5th intro (which to me is what really makes their version work - the way the screeching guitar lick comes blasting through the classical refrain). Great stuff, and this is a great recording (especially for an audience - thanks JEMS). I've also added as a bonus track (from the Detroit show), a cover of 'Let's Spend the Night Together' with the final part of 'The End' added, that they played at some of the earlier shows on the tour (but not the Flint show). It's an interesting and different (and lesser-known) addition to the show. Enjoy!