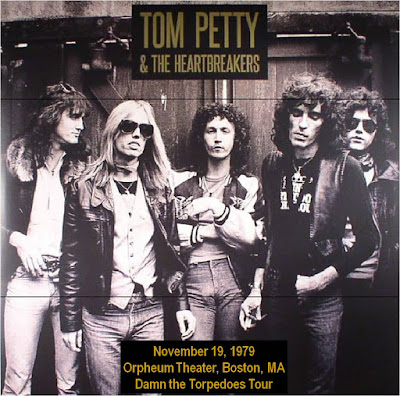 Continuing with Tom Petty & the Heartbreakers story: After their first album was finally getting some attention in the US, their 2nd album (You're Gonna Get It - 1978) sailed up the album charts, peaking at #23 (on the strength of 2 successful singles, 'I Need to Know' and 'Listen to Her Heart' and strong AOR radio play), and the band looked to be well on their way. Yet, despite a string of hits, they were still struggling. Like many bands starting out and eager for a record deal, Petty had signed a contract that paid them very poorly, and even worse, he had signed away all of his songwriting and publishing rights (He has said that at the time, he thought 'publishing' only referred to sheet music sales). So, the band was dismayed to find that despite their hit records, they were still in debt to the record company, and would be in debt for some time. So, in 1978, when their label Shelter announced that it had been sold (along with their contract) from ABC records to MCA, Petty was outraged to be sold "like we were groceries, or frozen pork", but thought he may have a way out of the contract. Because he was not consulted prior to the sale, Petty claimed they violated his contract, and therefore the contract was void, and he was free to pursue other deals. The band was working on their 3rd album at the time (which Petty was now financing himself) and he refused to turn any of the recordings over to MCA. Of course, MCA said "No Way", and in early 1979 sued Petty for breach of contract, and prevented him from negotiating with other labels, releasing any music, or even performing live. Petty responded by declaring bankruptcy, hoping to void his contract. MCA fought back hard, as they didn't want this to set a precedent, leading to other artists declaring bankruptcy to get out of their contract. They told him he could not fight them legally, saying he had to accept their deal and "Just shut up and play your music". But Petty stood firm, he knew his latest album was the best music he had ever made, he just didn't know if it ever would be released. He told them "I'll sell peanuts before I give in to you", and "You can't make the music yourself". Petty appealed to a judge to allow him to perform to pay his legal bills, and the band embarked on a short, hastily-arranged "Lawsuit Tour".  Eventually, MCA backed down, and agreed to set-up a new subsidiary label for Petty, Backstreet Records (with a much better royalty deal, as well as return of Petty's publishing rights). Thus, Petty's third album was finally released in October, 1979, and titled Damn the Torpedoes, in reference to the struggles. And it was an instant success, catapulting the band from cult band to Major Star status. Four singles became instant classics ('Refugee', 'Don't Do Me Like That', 'Even the Losers', and 'Here Comes My Girl'), and the album reached #2 (only held back from #1 by Pink Floyd's The Wall) and went triple Platinum.
Here is a show from early on in the Damn the Torpedoes Tour, in Boston. The tour kicked off with an appearance on Saturday Night Live, then some New York dates, then on to this show in Boston. No more supporting act spots, they were in-demand headliners now, putting on great full-length concert shows. This was the start of Petty and the Band becoming Superstars. The setlist featured 5-6 new songs from 'Torpedoes' (varied by date) added to their already strong set of original rockers and covers. Added on to this show is a few additional songs from radio broadcasts of their London shows in early 1980 as bonus tracks.

Hello,
Many thanks for sharing this. And thanks what all that you share withe this very beautiful blog. Congratulations also for all the comments.
Best regards,
Robert

Thanks for this one, and thanks for all the work keeping up this great blog !

Thanks so much for these great Tom Petty shows.and in chronological order,Tom and the heartbreakers are my favorite band ever.These early shows are so raw and full of energy,being all young men with something to prove.They really kick ass on these early shows. Very interesting how as time went on and years passed that Tom evolved as an artist and became more diversified ,branching out into more slow ballads and folk/country influences all while never completely abandoning his rock roots.Every tour was different but always great.These early shows Tom was the new young kid on the block and in his later years and at the end he was one of rocks elder statesmen.Im so sad he's gone ,don't think ive had one day where my eyes have stayed dry.The man and his music were a soundtrack of my life and many others too im sure.

Tom idolized groups like the beatles ,byrds ,bob dylan and more as a kid growing up playing small dives.Those very people he idolized grew to idolize him.That says it all about Tom Petty.Music and the world is much worse off without him in it.

Thanks for this bounty of Tom Petty.

Still having trouble adding his name to the list of the dearly departed.

Thanks for the Tom Petty sets!

I DL'd the flac set, then noticed the two tracks that are .mp3 only. However, when I clicked the "download now" button on each part's zippyshare page, my antivirus software blocked it. Any chance you can add those two tracks to the flac files?