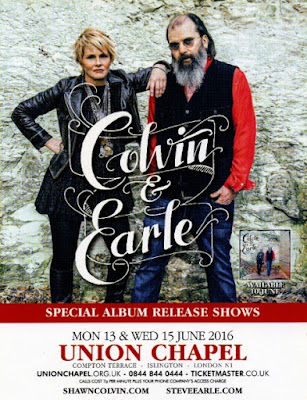 
Here's Shawn Colvin and Steve Earle in a recent show from their current joint 'Colvin & Earle' Tour, promoting their just-released new album together. Here are 2 renowned singer-songwriters, from seemingly very different styles and backgrounds joining forces to produce an album of new songs (some jointly written, some covers). The album has received a somewhat mixed reception so far, mainly by fans of each of these veteran songwriter-performers concerned that this combined effort does not sound like or is as good as their respective solo work. But that is missing the point of the collaboration completely, in that it isn't supposed to be a Shawn Colvin album or a Steve Earle album, this is Colvin & Earle, a whole different entity, and it is a delight to hear the two of them singing together on their new shared songs and the selected covers they do. And this show is a good intro to the album, as they perform all the songs from the album, some additional covers, but only a select few of their own solo songs they are most known for (So, those wanting a normal Colvin OR Earle show, may be disappointed). To me, what is great about this collaboration (and this show) is its very simplicity. The new songs are good basic 'Americana' songs. There are no fancy arrangements or intricate harmony workings here, just the song basics and the both of them singing together on all the songs. It has the feel of two old friends just getting together and playing some songs, joining in where they feel like it, and it all working out seamlessly. It's like you're witnessing these 2 old musical pros just casually playing and singing together in their living room, just for the fun of it. Certainly a very nice way to spend an evening. Check it out.

Thanks for this. Haven't seen Steve Earle live for a few years now and welcome the chance to hear him with Shawn Colvin.

Thanks for this one. I did a quick search for tour dates in my area, and came up empty. This will have to do instead.

funny - when the record came out I didnt want to like it. Big Steve Earle fan - not so much with Shawn Colvin. Dont really like her at all - saw her a year ago with Mary Chapin - one of the worst shows ive ever been to.
I got the record anyway - and didnt play it for a few weeks. Finally it popped up un my ipod - and I actually think its pretty good. in some places a lot of fun.
Im guessing maybe shell be the next Mrs Earle?