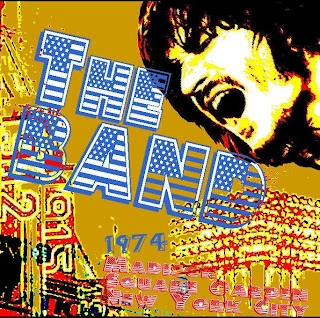 Here's more from the Band, this time from their 1974 Before the Flood tour with Bob Dylan. This is an excellent soundboard recording. I had planned on posting the shows from both nights of their NY - MSG shows (1/30 &31), but when I listened to the recordings I had, it was clear that both were the exact same show (which I believe is from the 1/31 late show), so I guess I don't have the 1/30 show after all. Even though I had 2 shows from different sources claiming to be from that night, they both were identical to the 1/31/show. Since the setlist was pretty much the same every night for the Band's portion of the show, it sometimes is hard to determine which recordings go with which show, but it was clear that all the recordings I had were from the same show. Anyway, this is what I have for the MSG shows, and it is great stuff (just wish I had known earlier that I didn't really have both shows, or actually all three, since they played 2 shows on 1/31). Oh well, that is one of the frustrating things about bootleg recordings, you can never trust them to be what they claim to be. But enjoy this classic Band performance, whatever the actual date.

Very nice. Thanks a lot.