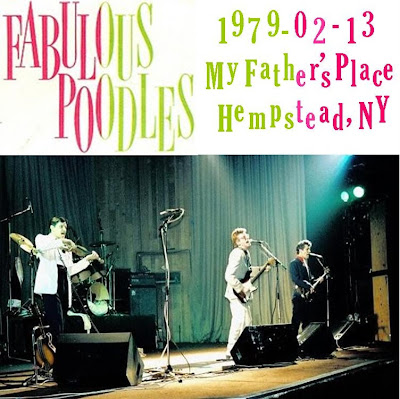 Here's a real treat (at least for me!). I have been looking for this show (or any other FabPoos show) since before I started this blog. As I have said previously here (when I posted another, much shorter radio show of theirs here), "The Fabulous Poodles were a great, but very short-lived late '70's band. These guys had a great sound that was a combination of early Kinks and The Who, mixed with 50's kitsch and 70's new wave, and clever, witty lyrics. That's right, not only did they sound great, but they were funny, too. Just a great, original, and overlooked band". Driven by Tony DeMuer's wit, antics, and energy, and Bobby Valentino's ferocious violin, these guys were sensational, especially live. But there are just so few live recordings of them. This is one of the few longer-length sets available (but not very available, as it took me many years to finally get hold of it), so this is a joy to hear. They only made three albums (only 2 in the US!) between 1977 and 1979. By 1980, they were gone, and in an ugly split with their manager, they were forbidden from ever performing as the Fabulous Poodles, or even using their Poodles stage names again. Tony DeMeur changed his name to Ronnie Golden and became a comedian with some success in British TV. Bobby Valentino became a respected session musician, lending his distinctive violin to countless recordings, including contributing the signature fiddle part to The Bluebell's UK Hit, 'Young At Heart', a few years later. Bobby remains active in music, and has a website detailing his various projects. I give my thanks and am forever indebted to blog reader David B. for sending this show to me. If you are not familiar with these guys, you really should check them out (if you are already familiar with them, no doubt you have already started downloading this, and don't need me to tell you). Enjoy!

sweet! still have my Mirror Star LP, purchased from a bargain bin around 1980... vinyl is Hot Pink!

this is great! I, too, never thought I'd find this anywhere!

Have another show from these guys opening for Tom Petty at the Warehouse in New Orleans on 1979-12-08 which will be making the rounds shortly.

Thank you so much for this! Been a fan of TFB since I bought Think Pink on vinyl. I was fourteen (1981) and had never heard of them - I just liked the cover!