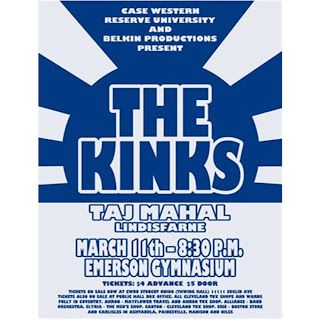 Here's another fine Kinks show, this one from a couple years later than the last, and thus adding selections from their 1970 (Lola vs Powerman and the Money-go-round) and 1971 (Muswell Hillbillies) albums to their concert repertoire. This was still before the band added horns and went into full Music Hall-theatrical mode a bit later in the '70's, so they still rocked here. And this is a very good sounding audience recording and full-length show from a stage in their career where there aren't many good quality recordings available. So sit back and enjoy some more great stuff from Kinks.
BTW, this show has been passed around with the date listed as 3/12/72. But some quick checking indicates that this show at Case-Western was on the 11th, they played a show in Chicago on the 12th, so I have corrected the date to the 11th.

you are the greatest!!

Such a selection of wonderful performances. Great, great blog.

Thank you for this and all of your outstanding Kinks posts!!

Thank You very much! It's very шmpressive - to hear live performance after so much years...