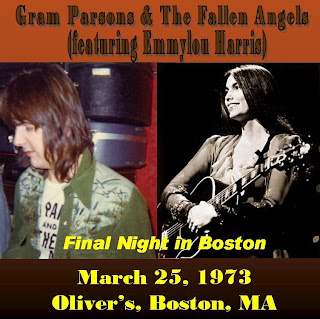 At long last, here it is, the 'other' Gram Parsons recording from his week-long stint at Oliver's in Boston in 1973, as promised. This one is from the final night's show (which was also apparently, the final night of this tour) on 3/25/73. Once again, this is an exclusive, previously uncirculated audience recording from our friend David M. Although this show features a setlist virtually the same as the previously featured 3/20 GP show (albeit a bit shorter, with loss of the songs 'New Soft Shoe', 'Hearts on Fire', and 'How Much I Lied'), there is one new song that was not played at the earlier show, 'A Song For You' from GP, and features several other elements that make it worthwhile to download this in addition to the previous 3/20 opening night show. Overall, the recording is pretty good, but the sound suffers from various onstage sound problems throughout the performance (whoever the sound guy was that night seemed to be somewhat incompetent, with poorly balanced mixes, feedback, and numerous sound anomalies throughout), which mars an otherwise wonderful performance. I have tried to smooth over some of these sound problems as much as possible, but there are still some very inconsistent vocal/instrument mixes (too soft on some songs, too loud on others, etc. In addition, there were many instances of momentary dropouts and channel loss that I have corrected where I could. There also are a couple of cuts due to tape flips (in 'Sin City' and 'Love Hurts'), but I have spliced in a segment from the earlier show to cover the missing section (with mixed results), as well as a short dropout gap in the 2nd set 'Six Days on The Road' that I could not adequately fill. One nice thing is the tape flips occur in different songs than in the previous show, so now we have full complete versions of 'California Cottonfields' and the ten-minute plus RnR Medley, which had cuts in the previous show. All in all, a wonderful addition to the few already available complete show recordings from this immensely talented and influential musician. Thanks again to David M for providing this wonderful document of the live shows from this legendary but unfortunately short-lived musician/performer.

Taken directly from a previously uncirculated audience master recording by David M. Some editing, corrections, and adjustments made for better sound quality and presentation. This version prepared exclusively for The BB Chronicles by BBKron (http://bbchron.blogspot.com).

Thanks to David and BB Chron for this show. I haven't listened yet, but I guess second set, track 9, song 2 into the medley is Jimmy Reed's "Baby What You want Me To Do", not "You Got Me Runnin'".

Thanks again for this rare show. Your site has opened a whole new world for me and I'll be forever grateful.

Wow, I cannot wait to hear this!

I want to thank you, and I also want to thank those who have these old tapes and make them available. As a collector/music nut, I know there is for many of us an excitement in having an "exclusive" that is not generally out there. So, it's all the better when these things find a larger audience.

And, remember (not to get too morbid), but sometime when you die, no one is going to want to dig through all your crap, so make sure it gets out there to those who will appreciate it.

Oh, and continuing further off topic, since this taper seems to have a Boston base, if there are any early Modern Lovers tapes available, that would just about drive me 'round the bend.

Thanks for amazing stuff.

Oh, and thinking of Oliver's and friends who report seeing Springsteen there and at other Boston spots, if you have any of that un-circulated stuff, well THE WORLD would be grateful for anything.