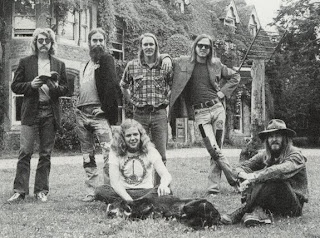 Here's another great underrated band from the '70's. The Ozark Mountain Daredevils' unique, quirky blend of rock, pop, country, folk, bluegrass, jazz, and comedy made them endlessly entertaining and just a heckuva lot of fun. With each of the members of the group writing their own songs, and with their diverse background and influences, as well as the multi-instrumental nature of most of the guys, this band could handle just about anything (and did), from the smooth pop melodies and vocals of Larry Lee to the down home folk of John Dillon to the country craziness of Steve Cash, they were quite versatile, yet had their own unique style and charm. Unfortunately, the pop world mainly knows of them through 'Jackie Blue', their one big hit. And not surprisingly, 'Jackie Blue' is one of their least interesting, most annoying, and far from representative songs. Check out all of their '70's albums, as they are all wonderful (particularly the 1st three). Here are a couple FM broadcasts of the boys around 1976-77, in excellent quality. Unfortunately there are not many live shows of these guys available, but this is a pretty good one. Although the band continued into the '80's and '90's (with varying lineups), the original '70's stuff was by far the best. Most of the original members have sporadically gotten back together for performances and tours over the years (even in 2010), and they released an album of new material in 1997. But they were at their best in the Mid-Seventies. They maintain an official web site (http://www.ozarkdaredevils.com/) where you can still buy their CDs, DVDs, and merchandise. Check 'em out and enjoy this show.