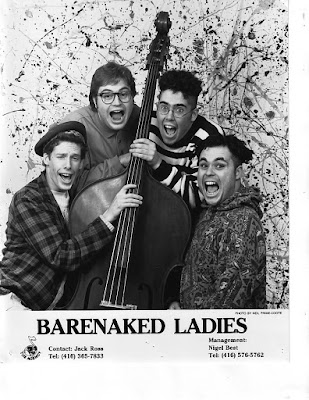 Sorry about the long time since the last post, but I've been on extended travel and vacation, and did not have access to the internet for most of that time. Anyway, after posting such fun groups as the Fab Poodles and Deaf School, I thought I would continue with who I think is the most fun rock band of all time, the Barenaked Ladies. Their music is fun, clever, and witty, their shows are fun, and they always seem to be having great fun performing their music. However, these guys are not only about fun, they are also great musicians, with great songs that are highly diverse and reflect many different styles and influences. They have grown and developed (and possibly matured?) as musicians, songwriters, and performers over the years, and have put out surprisingly strong, articulate, and nuanced performances and songs on their later releases (Such as the Are Me and Are Men albums). Thus, they have become another one of my favorite bands. In their early days, they were known as sarcastic, irreverent, smart-alecks, and were all about just having fun. Here is a concert from those wilder early days of the group, from May 1991, several months before their first major album, Gordon was released in 1992 (They had only a couple of self-produced indie tapes at this point). It is a wild, raucous, talkative, and almost out-of-control show (as they can barely contain themselves), with the 'ladies' featuring a number of tongue-in-cheek covers (everything from Prince and Madonna to rap and NWA), several other early original but never-released songs, as well as numerous songs that would appear on their first album. This well-recorded radio broadcast gives a good glimpse of the somewhat chaotic early shows by the band. I believe I originally got this from Nathan's Rock Moat, so thanks Wolfsbane.

Fabulous... I saw the Lades perform in a small club in Vancouver around ths rime, and they were amazing- smart, funny and brilliant chops for such a young band.
Thanks for the chance to hear this!!!!
d