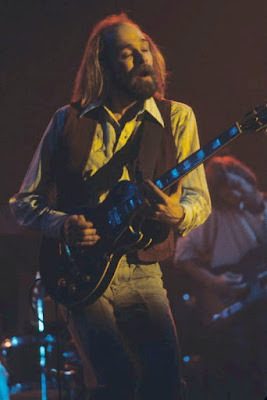 Moving on with Post-Traffic artists, here is Dave Mason. Although Dave Mason was a founding member of Traffic, and contributed on and off to the band through 1970, he never quite fully fit in with the group, not collaborating much, generally just showing up with his songs already formed and the band expected to play them as he wanted. So, although he contributed some great songs, he never seemed fully invested into Traffic, and kept quite busy outside the band even during the times he was ostensibly a part of it. During those years Dave Mason hung out and played with some really big names, including Jimi Hendrix (introduced Jimi to and played on 'All Along the Watchtower'), the Rolling Stones (Beggar's Banquet), and Eric Clapton with Delaney and Bonnie. And Dave was always more in the singer-songwriter vein, with less of the jazz influences as the other Traffic members. After leaving Traffic, he released his first solo album, Alone Together, in 1970, which yielded the hit single 'Only You Know and I Know'. He also released a duo album with Cass Elliot, Dave Mason & Cass Elliot, around that time.  After a dispute with his record company over his next album, Mason left, and the album Headkeeper (1972) was released despite Mason's protests. Mason moved to Columbia Records and released a string of increasingly successful albums, It's Like You Never Left (1973), Dave Mason (1974), Split Coconut (1975), culminating in Let it Flow (1977), which featured his biggest solo hit, 'We Just Disagree', as well other songs that received radio airplay, and reached Platinum sales status. Subsequent albums, Mariposo de Ora (1978) and Old Crest on a New Wave (1980) were less successful and marked the last of his Columbia albums and the slow decline of his solo career. Here today we have a show from Dave in the late '70's, still riding a wave of popularity, and joined by his regular band featuring ace guitarist Jim Krueger, as well as some of his rock star friends, with Stephen Stills sitting in, and Joe Cocker dropping by for a couple songs. A fine show from an FM broadcast, with Dave showcasing his solo songs along with a couple from his Traffic days and some classic rock covers.

This has everything to be a good listening, thanks!

Hello,
Yes you're right AtticRock. many thanks for sharing and congratulations for your blog.
Best regards from the French West Coast,
Robert