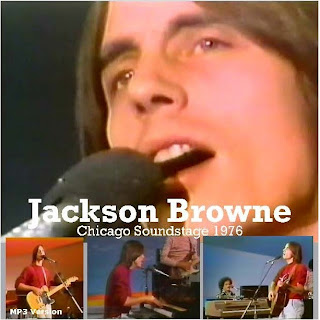 Moving forward with more Jackson Browne, in late 1976 Jackson released his 4th album, The Pretender, and this TV show (PBS' Soundstage) performance was staged shortly after it's release. And although the album was a success, this was a very difficult period for Jackson and his family, because just months earlier, in March 1976,  Jackson suffered the crushing loss of his wife, Phylis Major, who took her own life with an overdose of sleeping pills. Despite being devastated by this loss, Jackson eventually worked to finish the album by fall, adding a couple of songs that dealt with the tragedy ('Sleep's Dark and Silent Gate' and 'Here Comes Those Tears Again'). He began performing and touring again in late 1976 to support the album, which went on to become his biggest success up to that time. For this Soundstage televised concert show, Jackson sticks with songs from Late For the Sky for the bulk of the show (6 songs, including 'Farther On', which was not included in the previous 'Late' show I offered), introducing only 2 songs from the new album (the opening 'The Fuse', and the closer 'The Pretender'). And once again, Jackson puts on a great show, if not a bit somber, with heartfelt renditions of these classic songs. The recording is from a very good FM broadcast, but like many older cassette recordings, shows some telltale artifacts of limited frequency range, tape wobble, and some hiss issues. But still, overall, is quite good and the show is certainly of merit and well-worth repeated listens.

Many props to you -- been enjoying the Jackson and a few others since I found your blog a couple of months ago. You've helped me fill some holes, especially with Jackson live. I've loved the man for decades, but only managed to be in the same room with him on three occasions, over four nights, on perhaps his least memorable (Holdout)tour. Thanks for the quality and the huge effort.

I remember coming upon this live concert with surprised delight when it initially aired on our local PBS affiliate broadcasting through the Central Valley from Fresno! It was 1976. We still owned only a black and white TV. I was sixteen, soon to be seventeen and had just gotten my driver's license, had just had my first date and my first kiss, driving the family car out in the country twenty minutes, to Exeter on 198, my mom so graciously loaning me the family car for the evening, the 1970 Toyota Corona Mark II (gun-metal green). I took it to the carwash and cleared debris and books from the seats, making it not embarrassing to take my date out in it. I worked on the weekends at KONG FM programming their classical music show. I would hang out with the AM rock jocks and answered the phones for the night jockey, who tired of the chattering teen girls who would call teasingly trying to persuade him to let them come to the station and see what he looked like. That's where and how I met her, on the phone, that autumn of the Bicentennial year. It turned out we were both in the state honor choir and both were studying piano. I remember the tall girl's name, Phyllis, a name that was rarely encountered among Californian baby boomers, and strangely the name of Jackson's recently suicided wife and mother of his child. (I had read about the tragic events in the Rolling Stone I bought down at Midtown News). Phyllis.

It was an awkward name. I was an awkward boy. Phyllis smoked and was confident, wore much makeup and high heals, was charmingly gawky and sincere. She liked me. We kissed once. I was a child looking for water, looking for a life.
The coincidence of "the Phyllises" what with my reverential identification with Jackson Browne felt somehow quasi-meaningful. Everything was hyper-quasi-meaningful, lyrical and meaningful in my religious mythopoeic teen. Tenderly innocently naively meaningful. Good with guitars strumming major 7th chords and me lying on the teen bed of infinite potential high on faith and holy and unholy emotions. And with the swelling bravado and passion to endeavor to hang glide on feeling forever like this making for an identification with all of human experience, an embrace of authenticity that would not be able to fail as if one were held aloft by the breath of God, subject to the airflow that came of every WORD of truth said. And the maps and the drawings were showing up right on time and they required the soul of the imagination and a tender heart, and it needed to be sung, not merely spoken.