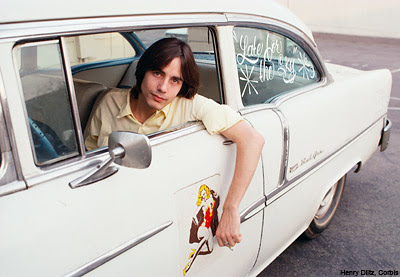 
Here's some more vintage live Jackson Browne, from his 1974 Tour, with David Lindley and a full band this time. Apparently, there are not many available recordings from this tour, so this is great to have. This was my absolute favorite time period for Jackson, and although I adore several of Jackson's albums, I think his 1974 album, Late For The Sky, was his definitive masterpiece, and one of my favorite albums of all-time. These may not be his most famous, popular, or 'commercial' songs, but they are among his very best, and collectively, attain a level of heartfelt personal and emotional songwriting that has rarely been achieved.  It retains a very special place in my heart, and was very meaningful to me and my development. The depth of feeling and emotions contained not only in the lyrics, but the music as well, that Jackson was able to capture and convey in this album was extraordinary. The songs are so personal, yet express such universal feelings and expressions of hope, longing, frustration, and desperation. Personally, this album got me through some very difficult times making the transition from high school to college to adult, and it still is very powerful every time I listen to it. And this tour, not surpisingly, contained more songs from Late For the Sky, than any other, so it is also a personal favorite of mine. This show features 6 tracks from Late For the Sky (although it is lacking 'Farther On' and 'The Late Show', 2 other stand-out tracks that would have been great to have here), as well as some favorites from his first 2 albums. Bonnie Raitt and her band also played on the same bill, so this show also features some guests, bass-guitar-tuba player Freebo (from Bonnie's band) on some songs, and Bonnie Raitt herself joins Jackson for the encore, a rarely heard duet version of 'Cowboy Boots'. I don't know the origin of this show, but it seems to be a soundboard recording (or FM broadcast), so the sound is pretty good; however, it is also obvious that it comes from an old cassette recording, with some of the inherent sound limitations that came with most cassette recordings from the 1970's. But overall, it is wonderful to get to hear this show from this period in Jackson's history. Great stuff.

Late for the Sky and Everyman both my favourites from this time. Nice to hear these. How did we manage with those cassettes, sludgy sound with massive hiss after the 3rd gen copy. As they say, 'in times of crisis we seek solace in the songs from our youth'. Thanks for the posts.

Can't get the link to work. Lovely stuff it looks like. !!!

Hey BB ... saw this tour in Portland ORE in Sept 74. Jackson was THE GUY for me at the time. So happy to have an opportunity to listen/relive that time. The link is still good!
Thank you very much,
The 25thBeatle

File does not exist - re-up possible ?