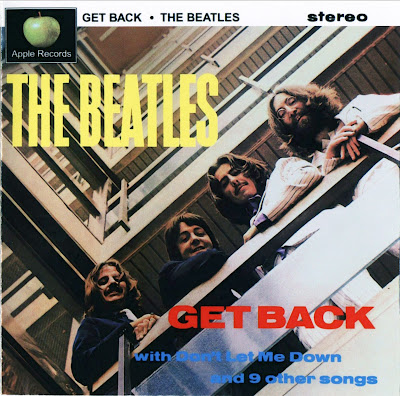 So, what I am presenting today, is what seems to me to be the best available version of Glyn Johns original rough mix acetate (3-10-69), taken from an only recently made available upgraded source, known as  'Untouched: Revision A'  (Pet Sounds version - de-clicked, phase-corrected, and speed-corrected). Highlights of these early mixes are that several different takes of the songs are used than in any subsequent releases, including a less formal take of 'Let It Be'. In addition, I have added in as bonus tracks, some tracks from Johns 'oldies' acetate (3-13-69), which includes the full-length 'Dig It', an alternate 'I've Got a Feeling', and the unadorned 1-31 take of 'Let it Be' (Before the 4-30 and subsequent overdubs added). Part 2 of the post presents the complete original (1st) version of Glyn Johns Get Back album (I have used the Dr. Ebbetts version for improved sound quality). Then, in addition, I have also included the 2 tracks ('I Me Mine' and 'Across the Universe') that were added for the '2nd' or 'final' version of the Get Back album (as previously stated, the rest of the album was essentially the same between 1st and 2nd versions, with only minor mixing or editing differences, so I have not included the full 2nd version - besides, the 1st version really better represents what the Get Back album was supposed to be). Now, much has been said over the years criticizing and complaining about the various versions of this album, these sessions, etc. But in reality, regardless of all that went right or wrong here, these sessions contained some of the Beatles greatest songs ever - 'Let It Be', 'Get Back', 'The Long and Winding Road', 'Don't Let Me Down', 'Two of Us', etc., and I love being able to hear all these different versions. I was always fascinated by the original Get Back concept and tried to find as much information as was available on it. Now, we have it all laid out for us, to make our own decisions as to what are the best (or worst) versions (In fact, virtually everything from these sessions has been available on bootlegs, including the entire recordings from all the filmed sessions - available as Purple Chicks 83 CD set 'The Complete A/B Road Sessions', which is, even for me, serious overkill). So, anyway, there you have it, all you really need to have and know about the Get Back album and project (although there is so much more out there), in the best forms available. And another all-time classic bootleg.

Hi Thanks for this, I was wondering if you could post a cd that you think is the best of there psychedelic period

Nice choice. There are tons of Beatlegs out there and the ywo you have chosen are pretty good. Have you heard the remastered Hollywood Bowl? It sounds pretty decent, they cleaned up the drop-outs and made it sound about as good as the 65/65 Hollywood Bowl LP George Martin fixed up for us back in the 70's. Anyroad keep up the great work, love your blog.

Narrow Dog,
Thanks for your comments. Although I will not be posting them, for the best of the psychodelic era recordings, I would recommend the Purple Chick Deluxe Editions of Sgt Pepper's and Magical Mystery Tour. These sets include many different versions and sessions outtakes of all the songs from this period. You should be able to find them at one of the many Beatles-related blogs, a few of which are included in my bloglist in the sidebar.

I linked to your site from So Many Roads. Loved the Beatles stuff and especially all the information you included. These are a sonic improvement to the old boots I've come to know and love. Thanks for sharing them. I'll be back to check out the previous posts on your site as you seem to provide much insight and information about them.

I have a Russian two-fer of "Get Back w/ Yellow Submarine. It has 11 songs and came with the same cover art as version #2. Also reproduced is a letter on Apple stationary that says:

Dear Dj:
The enclosed disc is an advance pressing of The Beatles forthcoming "LET IT BE"album.

This disc in an exclusive lilited pressing fpr radio station only. We hope you will use and enjoy it.

If you have any questions or comments, please contact me c/o Apple Records Inc., 1700 Broadway, New York City.

Anyway, if you'd enjoy using it, we'd enjoy having you.

If it's real, how does this fit into the scenario?

This disc in an exclusive limited pressing for radio station only. We hope you will use and enjoy it.

only one typo is correct.

Thanks buzzbabyjesus,
However, according to The Beatlesource, http://www.beatlesource.com/bs/mains/audio/GetBack/gb2intro.html
which has much info on the Get Back-Glyn Johns albums, the 'advanced pressing' release you mention is not real, but a bootleg fabrication made in the 1980's. here's what they said:
"According to Beatle folklore, in the latter part of 1969, promotional copies of the Get Back album were distributed to radio stations (and other media outlets) in the United States. In fact, no promotional copies of the album
were released to anyone. See a well done 1986 bootleg fabrication - here. However, by September 1969,
Glyn John's first compilations somehow made their way to radio stations throughout the eastern United States. Shortly afterward, bootleg (unauthorized) record releases began to appear in U.S. record shops. The
first Beatles bootleg, Kum Back, sourced from Glyn's first compilation, appeared in late 1969." They speculate that the 'leak' may have been John or Paul, but most likely someone in the Apple organization. But an 'advanced pressing' was never issued, and it certainly would not have been referred to as 'Let It Be', since it was to be titled 'Get Back' right up until the final release of Phil Spector's remixed version in May 1970.

Thanks for clearing that up, and thanks even more for the versions you posted.

Great recordings. Thank you very much. I noticed that the recording of Get Back version 1seems to be in reverse stereo in comparison to Let it Be and recordings I have heard of the final Get Back version. This is most noticeable at the start of Maggie May.

Can you reupload this?

Thank you this is great. We now have updated info from Glyn Johns' new book where he says he made the first acetate and passed copies out to the band a couple of days before the rooftop concert, which gives it a date around Jan 28th or so.

Thank you very much, some years ago, I bought an acetate disc (vinyl disc) called "The Beatles Renaissance" but I never could identify some songs, now is clear the origin. Thank you very much for the information and for the electronic archive. All best for you and colleagues this 2015!!!
I have some dics nd I would like to share could you let me know if that is posible?

Hey there, thanks for posting this. I was looking for information on a vinyl copy of this I found at a thrift store. The copy I have is signed to Wendy, John and I think this John is John Lennon's autograph but just the John as it looks like one oh his though I know he changed his up some. I am going to prvide a link to this image. If anyone here has any knowledge about this, please tell me if you think this is indeed his signature? http://img.photobucket.com/albums/v687/bricolo/temporary_zpsy8hcbsm5.jpg

Awesome,
Thank you so much for sharing such an awesome blog...
film studios in hyderabad
film production companies websites

Thanks for sharing such an amazing post with us and keep blogging...
top film studios in tollywood