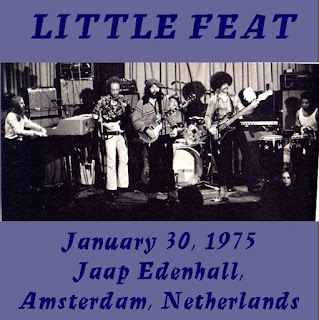 Here's a great Little Feat Show from their classic early days that has only recently surfaced (thanks to taper Hans Devente). Although it has been featured on several other blogs already, it was too good to not post here, too. Although not quite up to the exquisite sound quality of the Ultrasonic sessions previously posted here, this is nonetheless an excellent audience recording, with very good sound, and a great performance. And although it consists of mostly the same songs as the Ultrasonic sets, it is always great to hear different live performances of these gems. This set is also enhenced by the inclusion of the soundcheck set, which provides a glimpse at their pre-show warmup, which also includes some casual 'funk' and 'fusion' jammin'. So, it's a great new addition to the Little Feat live collections.

This looks like a cracker...welcome back to new posting!!!!

Little Feat are huge in my estimation!