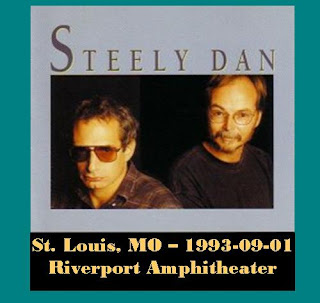 Continuing with more Steely Dan, here's a great soundboard recording from early in the first reunion tour, in 1993. After the 1974 tour, and dissolution of the live band and touring phase of the group, it was almost 20 years before Steely Dan would perform live again. Of course, the duo of Fagen & Becker, along with various studio musicians kept the Dan going through the 1970's (but without performing live), producing their most successful albums. But their last album before calling it quits was in 1980 (Gaucho). Fagen did perform live again in 1991when he put together the New York Rock and Soul Revue featuring himself, Michael McDonald, Phoebe Snow, Boz Scaggs, and others. It was after that experience that he began planning for a Steely Dan Reunion tour that would feature a full-size Jazz Band (8-piece backing band and 3 female vocalists) (evidently former Dan members Jeff Baxter, Denny Dias, and Jim Hodder were not invited back). The result was a stunning success, but, as noted earlier, this was a very different Steely Dan than the one hat last toured in 1974. This was definitely a Jazz Band and not a rock band, but a very good and unique Jazz Band. I saw them on this tour, and the show was very enjoyable and pleasant, a great listening experience, just not very exciting . They toured again with basically the same lineup in 1994, and again in 1996. In 2000, Steely Dan released their first studio album of new music (Two Against Nature) in 20 years, followed by a big tour. Then, in 2003, released another new album (Everything Must Go) and tour, which has been followed by subsequent tours in 2006-2010. In their most recent tours, they have been featuring live versions of complete albums, such as Aja, Gaucho, and the Royal Scam (notably, however, not any of the earlier albums). So, give a listen to this to hear the later version of Steely Dan and their music live. The setlist was basically the same for the whole tour. Included here is a bonus track, FM (from the NY Saratoga show), that was played as an additional encore at several shows on this tour, but was not played at this show. Go ahead and compare this fine show with the earlier shows from 1974, and you'll hear what I'm talking about. As I said before, All Steely Dan music is great stuff, but, contrary to what Fagen & Becker themselves might tell you, the fact is their very best stuff was back in '74.  Check 'em out and decide for yourself.

It was a 'friend of a friend' that recorded this show. He was an assistant on the sound board & plugged his portable DAT into the board & recorded the whole show. I was asked not to share this recording with anyone since he wasn't supposed to have done that. He was eventually let go for whatever reason and the recording was immediately spread. My DAT is 2nd from the master, not sure how clean the copies are by now but mine is squeaky clean.