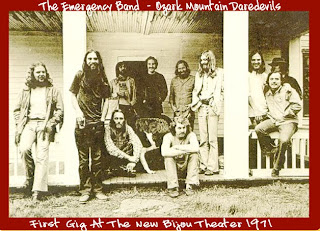 Wow! This is a great find for all fans of the Ozark Mtn Daredeveils! When I was searching for other available shows from 'The Daredevils', I came across this blog 'Tell it to the Devil's Lost Classics' that featured, not just a very early show from OMD, but their very first gig as a band, at the New Bijou Theater, Springfield MO in early 1971! How cool is that? How often do you get the chance to actually hear the very first gig from a classic band? In fact, at this stage they weren't actually even a band yet, just a group of guys that had recently started hangin' out and playing together. Steve Canaday, the owner of the New Bijou, needed a last-minute replacement for a band that had cancelled, and he had heard of this group of local musicians that had recently started playing together, so he gave them a call. They didn't have a name yet, but since they were being called in as an 'emergency' replacement, they dubbed themselves 'The Emergency Band'. As for the show itself, given the spontaneous nature of the circumstances, it's of remarkably good quality. They already had several of the songs that would make it onto their albums over the next few years, as well as several other new songs that never would be released. Even at this stage, they show much of the cross-genre styles and songs that would be their trademark and strength, ranging from country, pop, folk, and rock to jazz (There also are some extended jams or songs that go on a bit too long here, but that was probably because they were short on material and needed to fill the set). The recording quality is also amazingly good for this type of show, quite clean and clear throughout. After this they would become regulars at the New Bijou, until they made it big a couple years later. A true must-have for anyone that is a fan of this fine group. So, definitely check it out. I have no idea where they got this, but much thanks to the 'Tell It To The Devil' blog. Here is the link to that blog's original post (http://tellittothedevil.blogspot.com/2010_05_01_archive.html) If you drop by there, tell 'em I sent you. I also have re-uploaded the show myself for availability here at 'the Chronicles'.

BTW: One other 'daredevil' tidbit I found is this OMD rarity at another Southern Rock-Oriented blog, 'Skydog's Elysium'. This is from a much later period (1990), as the band was struggling, and had no recording deal. It is a rare self-produced cassette-only release of new material that was only sold at concerts, and never widely available, and called Now Hear This! (1990). Although not from their classic period, this tape still features 3 original members (Steve Cash, John Dillon, and Mike Granda) and new songs, and is actually pretty good. Many of the original lineup have gotten back together to do occasional shows and small tours over the years, even up through 2010. Check it out here:
http://skydogselysium.blogspot.com/2010/04/ozark-mountain-daredevils-now-hear-this.html

As previously posted, OMD also has an official web site, where you can buy all their official CDs and merchandise at reasonable prices (http://www.ozarkdaredevils.com/).
Posted by BBKron at 11:43 AM

OMD, ha! that's funny, considering the considerable difference between these fellas and the more common bearers of those initials, British post-punkers Orchestral Manouevers in the Dark.

I haven't explored these guys before but based on your enthusiasm I guess I'll have a listen. Where should I start?

Hey PopC,
yeah, I realized the OMD reference when I used it, but as far as I'm concerned, there's only one OMD, just like there's only one Elvis, and they aren't the ones that most refer to. anyway, yes, glad to have you aboard. I would suggest first downloading and listening to the '77 radio show available here (to see if you are at all interested in the kind of music these guys make). I just think they are very enjoyable and a lot of fun to listen to. So, If there is something of interest there, I would suggest any of their 1st 3 albums (My favorite is their 3rd, The Car Over the Lake Album, although many prefer the 1st two, which are a little more country-influenced). Anyway, hope you enjoy them!

I can't thank you enough for this post. I love this band and this first concert is priceless. Technically, this isn't an audience recording. The New Bijou had a small booth built with some fairly primitive recording equipment set up to record the various artists who played there. A much hipper establishment than anything in Springfield now. Unfortunately there was a welding shop next door and both places went up in flames on March 11,'72.

Thanks for the info, missourireb, I thought this sounded a little too god for an amateur audience recording, but didn't know had they had facilities to record at the Bijou. Also did not know of the short time period that the Bijou was around. too bad, as it seemed like a great place.