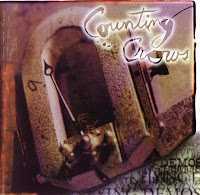 
Before signing to Geffen records, the band recorded demo versions of a number of songs, which became known as the 'Flying Demos'. This is the band's original demo tape that was sold at early shows, and later re-surfaced among the Counting Crows fanbase. These are excellent recordings, actually sounding much better than most 'demo' tapes. Some songs from the tape later resurfaced (in reworked versions) on the band's debut album August and Everything After. However, many songs remained unreleased (although different versions of some have subsequently appeared as bonus tracks, etc. on future releases). Included here are some standout songs that surprisingly did not become a part of their recorded output. A must for any fan of the band. Four bonus live tracks from 1994-08-19 (Montreal) have been added to the original 13 song tape in this version that has circulated among fans.

i can't begin to tell you how thankful i am that you've posted this. i came across much poorer versions of this years ago and was resigned to thinking there weren't better versions. so, thank you!

Haven't heard these in a long time; I was friendly with a couple of members of the band and they were undeniably great right out of the box...these demos had blown me away. But I never could really connect with them again after the first LP....thanks so much for these!