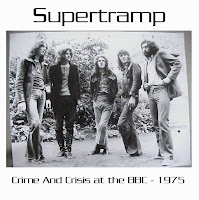 
As promised, here's another great Supertramp show from their prime, in 1975 just as 'Crisis? What Crisis?' was coming out. Great assortment of songs from 'Crime' and 'Crisis'. As with the 1977 radio show, this show has been passed around in many forms, titles, and versions, along with much misinformation over the years, so the exact date and recording information is not certain. However, this show seems to be the basis of almost all Supertramp boots from this period (1975-76). I have several different versions, claiming to be from Wembley, Hammersmith Odeon, and even a compilation of the 1976 US Tour, but they are all this same radio show, more or less. Seemingly, the most reliable information indicates that it was recorded at the Hammersmith Odeon, 1975-03-09, but I'm not sure. This is the by far the best recorded version I have found, as it is 'Complete and Remastered' according to the notes (Although these notes also claim that it is from Wembley). Great show and great sound. With This show and the previously posted 1977 show, it makes a great 2-CD Live compilation that covers the best of from this period.

Hi! This looks great, but seems to be corrupted at Megaupload. I can't get past 9.0MB (six tries). Can you reup it, or maybe we can arrange for a direct transfer. Thanks in advance.

Okay, please cancel that. Eleven tries later, it all came in. (Perhaps Megaupload was having problems.) Thanks.