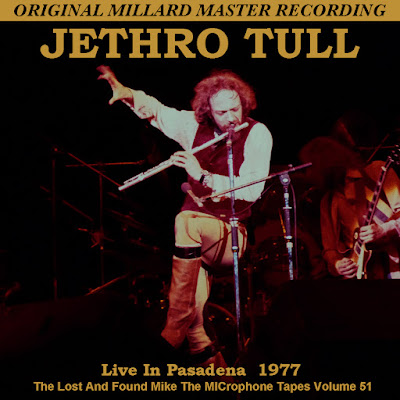 Continuing with some more wonderful audience recordings from the recently re-discovered master tape series of Mike (Mike the MICrophone) Millard, and so here is one of the all-time great rock bands (and one that has not yet been featured here), Jethro Tull. The origins of the band began way back in the early 1960's, when schoolmates Ian Anderson, Jeffrey Hammond and John Evans formed a band together. Following some growth and lineup changes, Jethro Tull released their first album, This Was (1968), as a UK blues-rock band, followed by Stand Up (1969) and Benefit (1970). After additional personnel changes, the, classic lineup of Ian Anderson (vocals, guitars, mandolin, flute), Martin Barre (guitars), Jeffrey Hammond (bass), John Evan (keyboards), and Barriemore Barlow (drums) was set, and the band set forth embracing a unique style that combined hard rock with acoustic interludes, folk influences, and progressive rock attitudes, and released a series of revolutionary and groundbreaking albums, starting with rock masterpiece Aqualung (1971), and then progressive rock classics Thick as a Brick (1972), A Passion Play (1973), War Child (1974), and Minstrel in the Gallery (1975). And their live shows were equally acclaimed for their virtuosity, theater, and spectacle. In 1976, they released Too Old to Rock 'n' Roll: Too Young to Die, a concept album about an aging rocker that was not as well received as their previous albums. But the band followed that mild disappointment with a another breakthrough triumph with Songs From the Woods (1977), which featured more folk influences and traditional instrumentation from English folklore, but combined with progressive and hard driving rock rhythms, drums and percussion. The show featured today comes from early in the 1977 tour (the first show of the tour actually), just prior to the release of Songs From the Woods (February '77). Another fine recording from Millard and an excellent show from Tull, featuring a variety of songs from their previous albums as well as some from the new one as well. A great period for the band.

Tracklist:
01 Skating Away (On The Thin Ice Of A New Day)[Cuts in after first line]
02 Jack-In-The-Green
03 Crazed Institution
04 Fire At Midnight
05 Instrumental
06 Thick As A Brick
07 Songs From The Wood
08 To Cry You A Song
09 A New Day Yesterday > Flute Solo incl. Bouree & Quartet > Living In The Past
10 Velvet Green
11 Too Old To Rock'n' Roll
12 Bungle In The Jungle
13 Beethoven's Ninth Symphony
14 Minstrel In The Gallery
15 Hunting Girl
16 Cross-Eyed Mary
17 Aqualung
18 Guitar Solo
19 Wind-Up
20 Back-Door Angels
21 Wind-Up (reprise)
22 Locomotive Breath
23 Land Of Hope And Glory