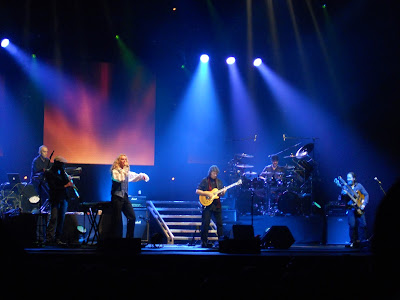 Following the Genesis Revisited album and Mini Japan tour, Steve went right back to work on more varied and diverse musical projects, producing in short order another classical guitar album, this time with Orchestral backing (A Midsummer Night's Dream, 1997), an acclaimed progressive album featuring dark but beautiful themes (Darktown, 1999), a collaboration with his brother John (flute) on a tribute album to classical composer Erik Satie (Sketches of Satie, 2000), and an album of songs originally composed in 1986, many intended for a second GTR album that never happened (Feedback 86, 2000). He continued his musical journeys with progressive, classical, rock, and classical albums (To Watch the Storms-2003, Metamorpheus-2005, Wild Orchids-2006, and Tribute-2008). Following some difficult times with messy divorces from both his wife and his business manager (including several lawsuits and the dissolution of his Camino Records), Steve continued his resurgent streak of acclaimed progressive rock albums with Out of the Tunnel's Mouth (2009) and Beyond the Shrouded Horizon (2011), followed by teaming up with Chris Squire (Yes) for a one album collaboration dubbed Squackett (A Life within A Day-2012). Next, Steve returned to reviving and re-creating more of his classic Genesis tracks in an even more extensive journey through the Genesis catalog for the double album Genesis Revisited II, in 2012, which was a big hit with progressive fans, resulting in his highest chart success since his early solo days. Once again, these were sensational new versions of Genesis classics, including the epic 'Supper's Ready' and great, but lesser-known songs such as 'Can-Utility and the Coastliners', 'The Chamber of 32 Doors', and 'Return of the Giant Hogweed'. For this collection, rather than offer distinctly different variations on the originals as he did in the First Genesis Revisited project, Steve chose to more closely re-create the original arrangements with some updates, and looking forward to live performances. Steve said his primary reason for re-doing more of these Genesis classics was because he really wanted to perform them live. So, starting in 2013, Steve began his extensive Genesis Revisited II World Tour, which continued all through 2014 as well, and was widely acclaimed, and resulted in the release of two different live albums and DVD concert collections (Genesis Revisited: Live at Hammersmith, 2013, and Genesis Revisited: Live at Royal Albert Hall, 2014). presented here is a great show from the U.S. leg, midway through the tour. I have added a bonus track of 'The Chamber of 32 Doors', a great song that was played at several dates early in the tour, but later dropped from the setlist. Throughout, Steve's great new versions of these songs are more than just nostalgia, but sensational new additions to his Progressive output.