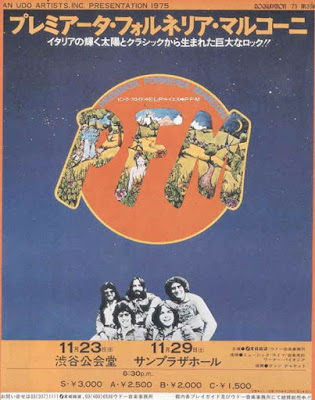 Here's more from PFM, an Italian prog rock band that made a splash in the '70's, featuring melodic and instrumental richness, sumptuous compositions and arrangements. This show features the band just a little more than a year later than the previous post, and although they play many of the same songs, there is a fundamental difference in the band, as they had now added a new lead vocalist, Bernardo Lanzetti, which brought a more forceful and dynamic presence to their vocals from this point on, and was first featured on their album Chocolate Kings (1975).

It seems 'Paper Charms' and 'Dove...Quando...' should be flipped.