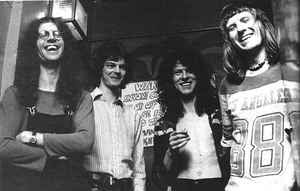 Here's more from National Health, a couple years later, at a 1978 show, featuring songs from their 2nd album, Of Queues and Cures (1978), and more of their whimsically eclectic jazz/rock, with Phil Miller and Dave Stewart still there, but with Alan Gowen now gone (temporarily) and Pip Pyle on drums. Gowen would return after this tour (but then Stewart left) and continue until 1981, when Gowen died. After that, Stewart returned to do a final album with the band, D.S. Al Coda (1982), which featured primarily previously unreleased songs written by Gowen, as a tribute and finale for the band.

Thanks fot the Nat'l Health shows. Intersting to hear Bill Bruford on the first one playing in Pip Pyle's place. OQ&C just may be my favorite Canterbury style album so I'm excited to hear that band in a live setting.

This website is mostly a stroll-by for the entire info you needed about this and didn’t know who to ask. Glimpse here, and also you’ll undoubtedly uncover it. gsn casino games