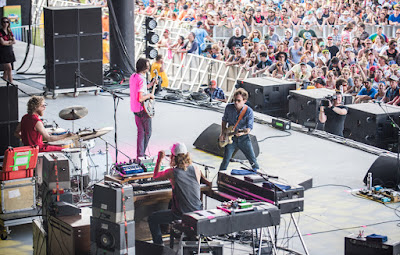 
Here's a 2015 show from the folk-rock, roots-rock band, Dawes. Dawes consists of primary songwriter-vocalist-guitarist, Taylor Goldsmith, his brother Griffin Goldsmith (drums, vocals), Duane Betts (guitar), and Wylie Gelber (bass), and come from the Laurel Canyon area near Los Angeles, California. They feature a pleasant 'vintage' rock sound and style, intelligent songwriting, and are just plain good. You can hear elements in their music similar to such classic bands as CSN, Neil Young, Tom Petty, and Jackson Browne, but they have their own style, too. Their debut album, North Hills, came out in 2009, with subsequent albums, Nothing is Wrong (2011), Stories Don't End (2013), and their latest, All Your Favorite Bands (2015).  This is their show from Bonnaroo last year featuring several songs from their newest album as well as some favorites from earlier albums.  Check 'em out.

I have heard a lot about Bonnaroo music festival from my friends. They have attended it last year, but I never attended this festival. Last year when my friends went to attend this fest, I was doing my official meetings at venue NYC. I feel so bad that I had missed the event.