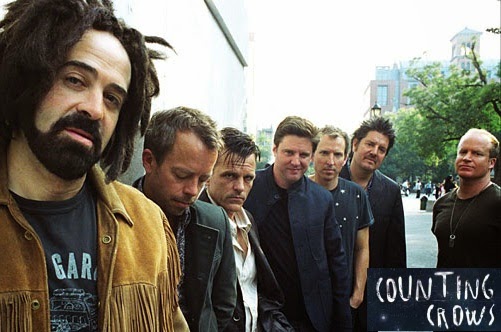 Ok, sorry for the lack of posts for the past month, but I have just been really busy on a big project for work and have had absolutely no time for the blog lately. But, I will be finishing things up this week, and hopefully will have a couple of holiday-themed posts coming soon. In the meantime, here is a recent full-length Counting Crows show I just acquired. I haven't even gotten the chance to listen to the whole show yet, just heard enough to verify that it is an audience recording with what seems like very good sound quality. So, enjoy this. By the way, I have been really loving the new Counting Crows album, Somewhere Under Wonderland,  even more now than when I first mentioned it last month. It may be their best album ever (certainly one of their very best). It is definitely the best album of 2014, as far as I'm concerned. I just can't get enough of it. It is probably their most bouyantly rockin' album, with killer tracks like 'Dislocation', 'Elvis Went to Hollywood',and 'Earthquake Driver', yet also has a couple of their very best acoustic tracks, and Adam's most gut-wrenchingly, emotionally powerful heartbreaker of all with 'Possibility Days', a magnificent track, and that doesn't even mention the 8+ min mini-opus 'Palisades Park', which Adam has claimed is the best song he's ever written. I can't understand why there has not been more talk and buzz around this album as one of the year's very best, as it is great. But then, what do I know, I'm just a music fan. Anyway, check out this Crows show, and if you like it, then go buy their album, you won't regret it. An official soundboard recording of this and many other Counting Crows shows is available at www.livecountingcrows.com

I was under the impression that Counting Crows had an open taping policy, and that sharing of audience recordings was allowed, but apparently that has changed. Perhaps since they now offer official recordings of their shows through their website, they do not allow any recordings of shows that they have available for sale. I'm not sure. I tried to make sure that this was an audience recording and not the 'official' recording before posting, but it doesn't seem to matter, as they apparently do not allow this recording to be shared, so it has been removed. I apologize for any inconvenience caused to the band or to the readers of this blog. I leave this post up for informational purposes. I fully support this excellent band and encourage you to buy their new album, Somewhere Under Wonderland, and any of their live recordings available for purchase.