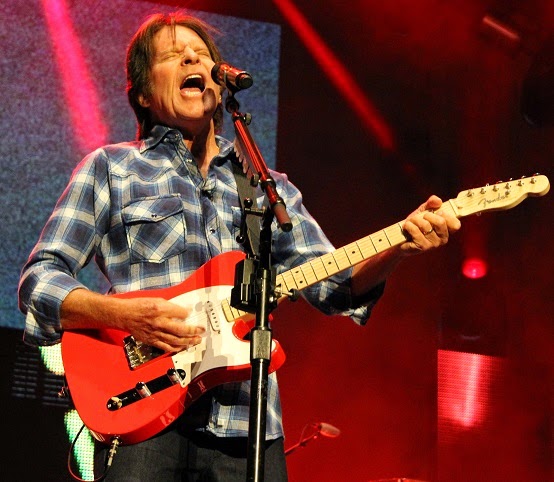 I saw John Fogerty in concert last week, and what a great show it was. He is just amazing, such a great talent and rock icon. He still goes all-out full throttle, putting everything into all his classic songs every night. He's pushing pushing 70 now, but you'd never know it, because he sings and plays with all the energy and enthusiasm of a young man. Unlike some others, who just go through the motions to play their old songs for fans, he genuinely enjoys every minute of it, and it shows. He just loves to play his guitar and belt out those songs. And he has lost virtually nothing over all these years, as he still sings and plays as great as ever, and his back-up band now (particularly Kenny Aranoff on drums) is arguably better than CCR ever was, and the songs just sound better than ever. What a great, fun show he puts on, focusing squarely on all the classic Creedence songs, but also sprinkling in various songs from his solo catalog, which fit right in and are classics themselves. These are timeless songs, just great classic rock 'n roll, and nobody does it better than John Fogerty, even at his advanced age. Although there are a few shows that have become available from his current 2014 tour, the sound quality from those are not nearly as good as this show from 2013, which sounds great, so I am presenting that one here. This show also boasts a fuller setlist than most, including the entire Cosmo's Factory album (undoubtedly CCR's best overall) and more than a dozen other CCR greats, as well as several other of John's own, and some covers, too. A great show from John Fogerty, one of the all-time great rockers, and still in his prime and going strong.

only 23 /30 downloaded
I can try again, but I'm guessing a faulty link?