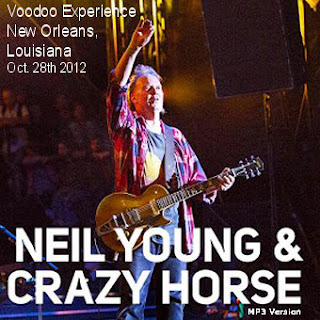 Here's some more Neil, in great quality once again, and this time featuring the full setlist (5 more songs than NY show), from the New Orleans show. We have been blessed to get several quality soundboard shows from this recent tour, so I had to feature another one that has the full show. And although the setlist has remained pretty constant on this tour, with only one or two songs changing each night, this show features one of the few times that 'Like a Hurricane' has been played this tour. I have also included as a bonus track a sensational version of 'Down By the River' from the Austin City Limits Festival show, which was the only show where that song has been played so far (otherwise, same set as New Orleans minus Mr.Soul &LAH). BTW, the previously featured NYC show was the only show so far to include 'Rockin' in the Free World'.  So, here you go, another great Neil show from the current tour, with a special bonus.

Thanks to BigO Worldwide for making this available.

Link Fixed! Sorry about that.

Well, at least I know you are still out there. It seems the only way I get any comments at all these days is to have a broken link.

Thanks for all your efforts. Can't wait to listen to this!