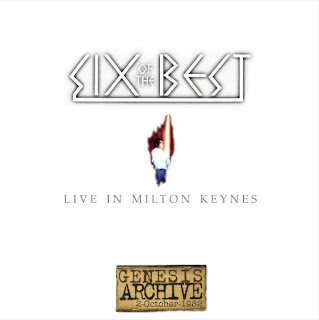 
SIX OF THE BEST - LIVE IN MILTON KEYNES

Here, finally, is the best version available of this historic one-time concert event. For those that don't know, this is the reunion concert that took place in 1982 to help Peter get out of debt after financing the W.O.M.A.D. concert event held earlier that year. His former bandmates came to his aid and we are left with this performance. Although the band did not have a lot of time to practice before the concert and it is noticeable in some parts, this remains a unique and historic concert event. It is still the only concert performance with all members from the classic early '70's lineup present. Unfortunately, the available recordings are not the greatest quality (generally mediocre, partial audience recordings). However, this is by far the best available recorded document of the event. TM productions has consistently produced the best quality Genesis bootlegs, and they have thoroughly cleaned up and remastered the available tapes from this concert, resulting in a very good quality recording. I have 3 other recorded versions of this concert, and this is, by far, the best version available. I had been looking for this one for quite awhile. Thanks to Dave at Quality Boots for recently making this available.

Disc 2: http://depositfiles.com/files/yhqyi8qlj
The soundboard recording of highlights from the rehearsal session (9/29/82) for this concert is also available through an earlier post on this blog, just go to the Genesis link in the sidebar.
Posted by BBKron at 9:15 AM

thank you for this. never thought i'd get a chance to hear the legendary reunion show.

Thanks a lot! I've downloaded quite a few versions of this bootleg, and they all sounded quite terrible. Let's see what this one sounds like.

Thank you for sharing this show. Tough one to find.