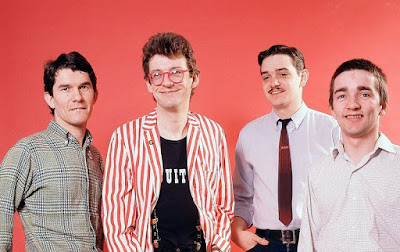 OK, here's a show that I had been searching for for a very long time (since before I started this blog), one of the very few known Fabulous Poodles live show recordings. I have been fortunate enough to have and post other available FabPoo recordings, but had been unable to track down this one down, until a reader of the blog came forward to provide it to me (Much thanks, Stuart!). If you aren't familiar with The Fabulous Poodles, they were a great, but short-lived new wave/old school 70's UK band with a great style that combined an early 60's Who and Kinks sound with 50's kitsch and 70's new wave, and outrageously witty lyrics (See previous posts). I loved their unique sound and style, but they only made 3 albums before disbanding in 1980 (only 2 released in the U.S.). Their only U.S. Tour (in 1979) was marred by having all their instruments and equipment stolen within the first few days, and having to scrounge up borrowed and make-shift equipment the rest of the tour. But they carried on nonetheless. This show comes from a radio broadcast of their NY Bottom Line Show, shortly after their equipment issues, and, unfortunately, it does affect the show, as for the first few songs the amp for the violin (a very important component of their sound) is not working at all. They eventually are able to come up with an alternative fix for the rest of the show, but the early songs are without Bobby's trademark violin. So, again, this is one of the few full show recordings of The Poos, and despite the equipment issues, there are some great moments. BTW, The complete studio recordings of The Fabulous Poodles were recently reissued (2018) in a CD Box Set (Cherry Red Records, UK) that includes all the songs from their three albums as well as many other singles, unreleased tracks and demos, as Mirror Stars: The Complete Pye Recordings 1976-1980, and contains everything they ever recorded. It is a goldmine for Fabulous Poodles fans, and its modern day release shows that I certainly am not the only one who remembers and cherishes the music these guys created. Check 'em Out.

Agreed! Can't have too much Poodle.

Would love to get a copy of this but I'm getting a '403 Forbidden' error message on both FLAC & MP3 links - any idea what's gone wrong?

Unfortunately, Zippyshare has been blocked in several european countries (including UK, Germany, Italy, and Spain that I know of). This started last year in UK and has been spreading to the other countries in subsequent months. This seems to be related to ongoing legal (copyright?) issues with the site in those countries, and they have chosen to just block those countries from accessing it. I don't know if this is just a temporary or permanent thing. but I don't have any control over it, and I do not have the time or resources to move all my files over to some other filesharing service at this time, especially since they are still accessible to the rest of the world. Sorry. I have heard that the block can be gotten around by using VPN access (other sites can show you show to do it), but I have not tried this so don't know if or how it works.