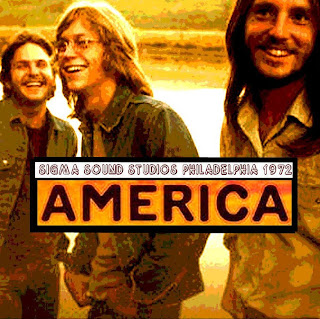 I've got several items of great interest that I have accumulated from other sites over the past couple months that I also want to share here, and will try to post before the end of the year. Here is the first one, a great early America show that is just the thing that all America fans have been hoping would eventually turn up. It's a complete show radio broadcast from early 1972, when America was still performing as an acoustic trio. It's the most complete show that has surfaced from these early days, and in addition to the half dozen songs from their first album, the performance features a few that would later appear on Homecoming and Hat Trick, as well as four unreleased songs (that they refer to as 'experimental') that were only played at these early shows, then were dropped. And it is a very good quality recording. As I've said before, there are very few recordings available from these great early years of America, when their acoustic guitars, stellar vocal harmonies, and folk-rock style shined the brightest, and before George Martin turned them into a slick pop radio band a few years later. So, this was just a joy to find. I picked this up from T.U.B.E (theultimatebootlegexperience), so have to give him credit for making it available (don't know who first posted the torrents), but I also just had to post it here, as this is great stuff. Enjoy!

There was a cut at ~4:50 mark of track 8, lasting about 7 seconds, due to a tape flip. However, I have fixed this by splicing in the missing section from an alternate tape source of this same show (recording from 1973 BBC broadcast) with a relatively seamless edit. So the recording is now complete, and this has been fixed in this upgraded version of the show.