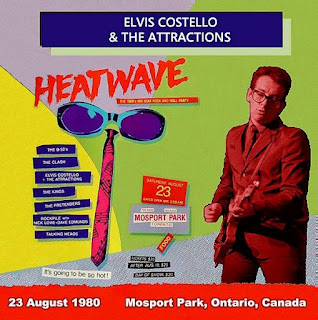 My New Year's Eve Elvis post reminded me of just how great, prolific, diverse, and versatile Elvis was during the 1980's. So, for the next few weeks I will be featuring an Elvis show from each year of the eighties. It seems alot of attention is given to his early shows (1977-1979), but somewhat less so for the 1980's. But, it was starting in 1980 that he began to branch out in different directions with specific genre albums, which further demonstrated his range and genius as a songwriter and performer. The NYE show was from 1981, featuring songs from Almost Blue, his country album. This show, a very good recording from the 1980 Heatwave festival in Toronto, was ostensibly in support of his newest release at that time, the 1960's Motown-inspired Get Happy!, but as usual, Elvis throws in numerous songs from all his albums, and several yet-to-be-released gems from the upcoming 1981 album, Trust. So, I hope you enjoy this one and keep coming back for more info and shows from 'Elvis in the Eighties' all month long.

Great plan! I hope you post something I DON'T have yet but I have been collecting EC shows like crazy. I recommend something from his solo acoustic tour in 1984. And I'd love to find the FULL version of the Philadelphia 8/11/84 show with the Attractions that was excerpted for radio broadcast and the boot "Writing My Story", if you by chance have that. Whatever you post though, way to spread the word about Elvis' '80s!

Jeff, thanks for the input, but if you have that many Elvis shows, I doubt I have much you don't have. I plan to post the '84 Philly show, but unfortunately, I do not have the full show, either, and have not been able to find it anywhere. I also would like to post something from the solo shows, but all I have heard from those were pretty poor recordings. If you know of a good quality show from the solo tour, let me know, cause I don't have any. Thanks for your interest.

i was at this fest-became a teenage head fan here even though i had heard the first lp on our college station "album at midnight" show. what i'm looking for-and it might be here somewhere furthur along is elvis' at the hot club phili wmmr? show. has any performer done more fm broadcasts-wow! lee