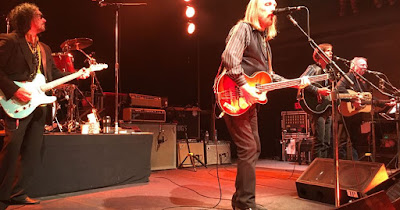 Here's some more Tom Petty and Mudcrutch. This time, rather than their original older stuff, here is the current status of Mudcrutch on their recent 2016 US tour in support of their 2nd full album, Mudcrutch 2. Tom apparently had fun reuniting with his original band for an album in 2008, so he did it again in 2016 for another album, and this time with a full-scale, full-fledged tour. I've told the Mudcrutch story previously, so no need to go over that again, but this probably also could be considered as part of the collaborative tour series of late, as rather than being the full-time frontman, as with Petty and the Heartbreakers, with Mudcrutch Tom takes a step back and let's the rest of the band have their spotlight, with each member singing lead on at least one song on the new album, and Petty handling bass and letting others do most of the guitar work. And it all seems to work, as Mudcrutch has a different sound than the Heartbreakers, and they are free to go back and do more country-rock and old-time Rock 'n Roll, and just have a good time. For these live shows they have added Herb Pedersen, bluegrass instrumentalist extraordinaire (not a regular member of the band), to round out the sound. And it's a tribute to Petty that he is content to let Mudcrutch only do Mudcrutch songs (and oldies), and not try to squeeze in a few of Petty's own biggest hits into this band's setlist. This is a wonderfully fun show and very good recording, with a few extra songs from other shows from this tour thrown in to round out the recording.

Hello,
Happy to be the first to thank you for sharing this concert but also all that you have. Beautiful blog, Congratulations.Best regards from the West Coast of France,
Robert

Hi,
Thanks for this! Unfortunately, Part 2 is no longer on Zippy. Could you re-post?
Best,
Vaughn