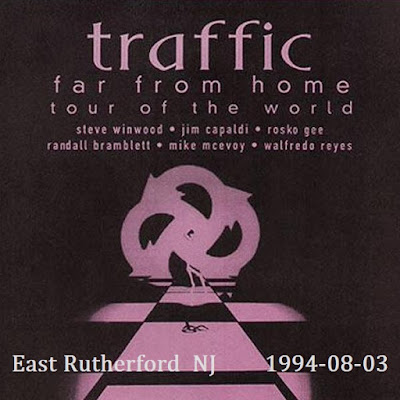 Steve Winwood, after re-connecting with former Traffic bandmate Jim Capaldi on some songs for his Refugees of the Heart (1990) solo album, when he began working on his next album asked Capaldi to help him out on it. The resulting songwriting collaborations eventually became designated a new Traffic album, Far From Home (1994), even though only Winwood and Capaldi were involved (with Steve playing all the instruments except drums, and Jim adding some drum, percussion, and backing vocals). So, it wasn't exactly a reunion album as much as Steve and Jim just hanging out and working together on some songs. Nonetheless, it was labelled a new Traffic album, what would be their last, and it garnered much success. For the accompanying world tour, former bassist Rosko Gee joined in, and veteran multi-instrumentalist Randall Bramblett (Sea Level, and much session work) was added on flute. sax, and keyboards, along with Mike McEvoy (keyboards) and Wlfredo Reyes (drums), making a strong touring band. For part of their tour, they opened for the Grateful Dead, upon a request from Bob Weir based on a fan suggestion. The tour was a big success, but did not lead to any further recording or touring from Traffic. Many years later, in 2005, a double live album from this 1994 tour was released as The Last Traffic Jam, and it was dedicated to Jim Capaldi, who had died of stomach cancer that year. Here is a fine show from that 1994 tour, one of the dates where they opened for The Dead, and which featured Jerry Garcia joining the band on 'Dear Mr. Fantasy'. Although the setlist was a bit shorter on these opening sets than for their headlining shows on this tour, it's still a great show, and nice to hear Jerry Garcia jamming with Traffic.