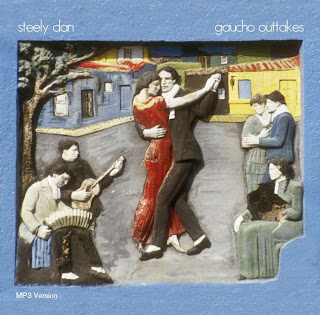 For many years, this was considered the holy grail of Steely Dan bootlegs, as it features a complete alternative Gaucho album including several unreleased songs from the Gaucho sessions that were not included on the eventual album. As is known by most SD fans, Becker and Fagen had to endure various misfortunes during the long and grueling process of the making of Gaucho, which caused numerous delays in its release. Becker was hit by a car, one of their favorite new tracks "The Second Arrangement" was accidentally erased by an assistant recording engineer, and there was a dispute over which record company had the rights to their forthcoming album. MCA won the contract dispute (although Fagen and Becker had already signed to a new label, WB) but then decided to increase the album's list price to one dollar more than all other albums at that time. Donald and Walter tried unsuccessfully to fight the price increase. Through all this, Fagen and Becker grew more and more disenchanted, and eventually scrapped much of what had been recorded previously, including several entire songs. Gaucho was eventually released in November, 1980. But the ordeal, poitics, and aftermath of the making and remaking of Gaucho may have lead to Donald & Walter's decision to call it quits after this album. Nonetheless, these outtakes represent all that is left from these sessions and the last unreleased songs from Steely Dan.
This outtake collection, consists of the 'Lost' Gaucho album (CD1), which is a complete album vastly different to what was released, as well as a collection of other miscellaneous outtakes, demos, and alternate versions from these sessions (CD2). Of the 8 songs included on the 'lost' edition, only three of these were tracks that appeared on the official album, in somewhat different form. 'Were You Blind That Day' was an early rendition of a song with different lyrics that finally appeared as 'Third World Man' on the released Gaucho. 'Time Out Of Mind' on the lost version is simpler, missing the embellishments added on the Gaucho version. And the title track here is just an instrumental. The rest of the tracks are original unreleased Steely Dan songs prepared for Gaucho, but not used. These include 'Kind Spirit', 'The Bear', 'The Second Arrangement', 'Talkin’ About My Home' and 'Kulee Baba', and have never been released in any form. Earlier versions of these songs circulated somewhat in poorer quality (but were difficult to find) until around 2002 when high quality copies of the sessions emerged. Although these sessions have become fairly widely availble in the last few years, I also wanted to include them here as well, for completeness.

Link to this previous version of these tracks no longer available. However...

Now Available! - Upgraded and enhanced version of these files (phase-corrected, EQ, and audio clean-up) available in both lossless and mp3 versions - check here

thanks for this, appreciated

Yes! Thanks for the awesome outtakes!

Thanks love Everything Steely Dan, been looking for AJA Outtakes and various other stuff like that. Already have Katy Lied and Royal Scam outtakes and want more! Anybody know where to find?

Does anyone know the rar password to ynrar these files?
Thank.s

No password needed, just use any program that can extract .rar files

Thanks for the Steely Dan updates.

!
Brilliant, been looking for a decent quality a long time.
Thank you!

@Sam, so far the only other outtakes I've found are Runnin' Child which was left off Can't buy a Thrill, stand by the seawall was a demo from the aja sessions, the bear included in this set was also an out take from aja. Theres a record plant demo of Any major dude on youtube. Theres some tracks they've only done live if thats your thing, This All too Mobile Home, Cash Only Island. Some single only tracks they released include Dallas/Sail the Waterway and Here at the Western World and F.M.

There is a whole collection of demos released as Becker and Fagen that can be found using that name (Catalyst is your best bet if you want that collection as its the most exhaustive set) as well as the soundtrack to a lost movie "You've gotta walk it like you talk it" the soundtrack is available.

grabbed this years ago and only just got round to properly listening.

omg... kind spirit, the bear, 2nd arrangement, talking about my home, cant write home about you, and kulee baba have to be 6 of the best SD songs ever. genius... cant believe these were left on the cutting room floor!

Thank you for sharing!