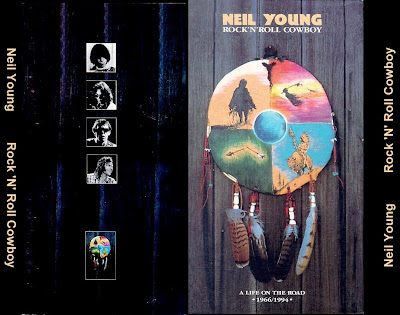 Info, reviews:
In the late '80s, Neil Young casually mentioned in an interview that he was planning a box set of rarities and outtakes (entitled The Neil Young Archives), which would be ready for release shortly. It never appeared, even though it's supposedly still being assembled and finalized to this day [Ed. note: Neil's Archives Vol.1 was finally released in 2009, covering the years 1965-1972]. To alleviate the fans' frustration, this bootleg four-CD Italian (Great Dane Records) box set appeared, and it covers all the phases of Young's lengthy concert career. The first disc (1966-1973) proves to be the best. It's here that you'll find an early barnstorming guitar version of "Cowgirl in the Sand" (clocking in at 14-and-a-half minutes) and a harmonious Crosby, Stills, Nash & Young take of "Tell Me Why." A piano-laden medley of "A Man Needs a Maid/Heart of Gold" follows, and the beautiful unreleased acoustic nuggets "Everybody's Alone" and "Dance Dance Dance" comfort the listener. Disc two (1974-1978) contains material from Young's dark period, including unplugged versions of "Pardon My Heart" and "On the Beach," recorded at New York's Bottom Line. Disc three proves to be the weakest since it covers what is widely regarded as Young's unfocused years (1982-1985). "Touch the Night" is essentially a rewrite of "Like a Hurricane," and there is a reason why "Let Your Fingers Do the Talking" was never released. The countrified "Down by the River" and a banjo version of the reflective "My Boy" save the disc from being a total washout, however. And the final disc (1986-1994) shows Young regaining his strength and focus with the definitive "Rockin' in the Free World" (from Saturday Night Live) and "Only Love Can Break Your Heart," where he is joined by friends Simon & Garfunkel. The set of four may be a bit too intimidating for more casual fans, but the sound quality is consistent, and it proves to be the ultimate showcase of Young in concert. Also included is a 45-page booklet packed with pictures, song notes, quotes, and a list of every live date played by Young from 1968 to 1993. ~ Greg Prato, All Music Guide

Rock 'n' Roll Cowboy is a rich, if somewhat frustrating, listening experience. It's a four-disc set that collects various Neil live performances, spanning from his Springfield days to his Grammy Award show performance of "Philadelphia" in 1994. Among the many treats: "Sweet Joni," a 1973 piano-based paean to Joni Mitchell apparently only performed once. Other highlights include several Stills-Young Band run-throughs, especially "Southern Man" which features some scintillating guitar solos from both Stills and Young. Other highlights include the unreleased songs "Everybody's Alone," "Traces," "Love Art Blues," "Give Me Strength," "Lady Wingshot," "If You Got Love," "Gonna Rock Forever," "Amber Jean," "Let Your Fingers Do the Talking," "Grey Riders," "Nothing is Perfect," "Ordinary People," "Silver and Gold," "Homefires" and "Separate Ways." Add in several reworked versions of known quantities, such as the Saturday Night Live debut of "Rockin' in the Free World," "Shots" (performed acoustically from San Francisco's Boarding House) and "Helpless" (a stunning take from Neil & the International Harvester's Austin City Limits appearance in 1984) and "Stringman," recorded in London in 1976, and you have a great collection. However, thanks to this collection's breadth--in total, 63 songs taken from upwards of 40 concerts--the sound quality ranges from the near-atrocious to excellent. Thus accounting for the frustration at times. One other comment: The accompanying booklet to Rock 'n' Roll Cowboy is excellent, far surpassing many liner notes to legitimate boxed sets, featuring a well-written overview of Neil's career as well as a track-by-track commentary AND complete tour schedule from Neil's 1968/69 solo tour through to his 1993 jaunt with Booker T. & the MGs. It does much of what the set itself does, collecting many of Neil's comments and observations on many of his songs. Despite its sound lapses, until the Archives are released--and possibly even then--this is a true "essential." (A+)

Thanks so much for your blog...love it !

Wonderful.
I'm just reading Paul Williams' book "Neil Young: Love to Burn" with a detailed description of "Rock 'n Roll Cowboy".
Now I can also listen to the music, not just read about it ;-).

Thank you very much.

the links are dead to bad looks good.

Any chance of getting the booklet a new link? Thanks for all the music!

Max,
Link for artwork/booklet updated. Thanks for your interest.